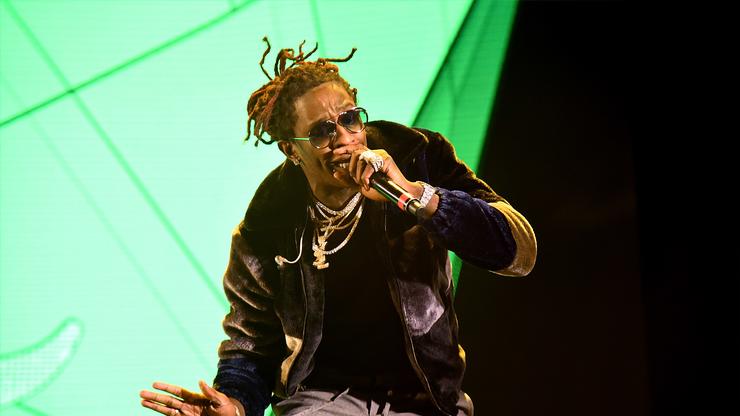 Thugger’s Louis Vuitton bag reportedly had $40K in cash, jewelry, and a hard drive with 200 unreleased songs valued at $1 million.

Today is a celebratory day for Young Thug as his Punk album has remained on repeat upon its release. The record has caused the Atlanta icon to trend throughout the day, but there is a legal hurdle that Young Thug is facing now that he has filed a lawsuit against a woman he claims handed over his personal property to a stranger.

According to AllHipHop, Young Thug returned home to his luxury apartment and while exiting his vehicle, he accidentally left a bag behind. He claims an employee of the complex did not follow protocol and gave away his bag that housed stacks of cash, jewelry, and unreleased music.

“Upon arrival at The Trace, Plaintiff entered the parking garage with his resident parking pass and parked on the third (3rd) floor. Plaintiff unloaded his belongings and then went to his apartment,” the lawsuit reads. “Unbeknownst to Plaintiff, a leather Louis Vuitton bag was left beside his vehicle. A resident of The Trace reported the bag next to Plaintiff’s vehicle to Lillie Bouie, an employee with The Trace concierge service.”

“At approximately 6:30 p.m. on November 2020, Ms. Bouie retrieved the Louis Vuitton bag. Ms. Bouie knew the bag belonged to Plaintiff due to the brand of the bag and because it was immediately next to Plaintiff’s black Lamborghini.” The court documents state that she then placed the bag in a secured and locked location along with a note to the other employees “not to release the bag to anyone without contacting her first” in order to make sure that it went to the right person.

However, another employee named Latoya Guest reportedly did the opposite. She is accused of seeing the note and handing over the bag to “an unknown person.”

The contents of the bag included:

Thugger is reportedly suing for negligence and alleges that The Trace has failed to adequately train their employees on how to handle situations such as these. It is unclear if The Trace’s representatives or attorneys have responded to this lawsuit at this time.