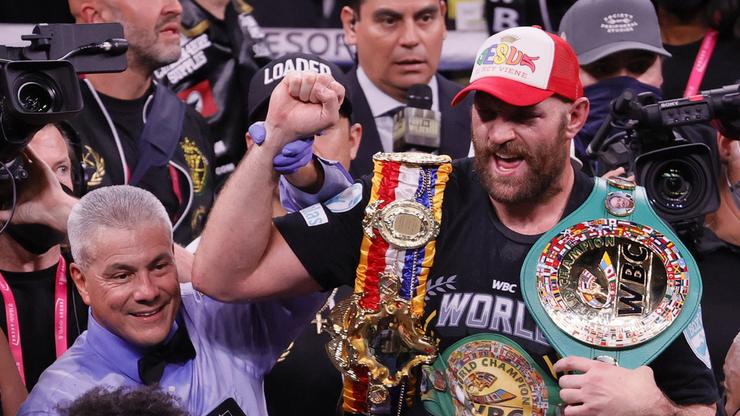 The heavyweight champion is in some hot water.

Tyson Fury is one of the more polarizing figures in boxing and sports in general.

From his self-explained issues with alcoholism and drug use, along with incessant partying, Fury has been painted as a sort of poster child for what dedication and hard work can do.

It has been widely publicized that the two-time heavyweight champion overcame obstacles to reach his current peak as one of the best boxers in the world. Completely changing his lifestyle to reach the boxing mountaintop, it felt as if Fury was finally reaching the good graces of both boxing fans and sports fans in general, especially after his most recent victory over Deontay Wilder and defeat of the vaunted “Drake curse.”

The internet, however, moves quickly.

After defeating Wilder on Saturday night, a short video clip of Fury and his family singing along to The Notorious B.I.G.‘s “Juicy” made the rounds and dealt another blow to the boxer’s reputation.

Holding a baby in one arm, Fury was filmed rapping along with Biggie and using the n-word without any censor. Proclaiming boldly, “And if you don’t know, now you know, n****,” the boxer and his children rap the racial slur in unison. Fury, using animated hand gestures and adjusting his expensive-looking sunglasses, very clearly uses the n-word and his children echo it in the background.

Fury is no stranger to controversial comments, and many of his harshest sentiments have been aimed towards Wilder, but this couple-second long video clip is on another level. The clip had made the rounds over a year ago, in 2020 but the third installment in the Fury/Wilder saga brought it back to the forefront of attention and naturally, fans were quick to react.

Check out the reactions to the Fury video and let us know what you think in the comments below.