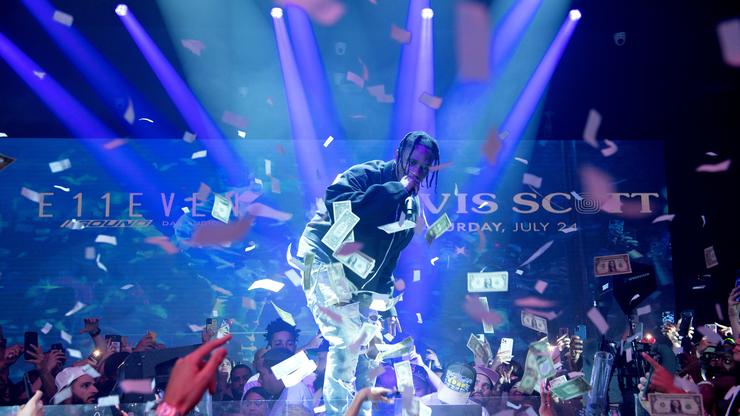 Travis Scott could make a compelling case for the most influential man in sneakers right now.

Multi-platinum artist Travis Scott has wowed fans with his discography of well-put-together psychedelic-sounding songs and big-budget concerts that have turned arenas into amusement parks. But while the music continues to be an important tool in expanding his own influence, Scott’s style, specifically his affinity for dope sneakers, remains one of the most admired. Since 2017, Scott has been one of Nike and Jordan’s most important collaborators. The Houston-based rapper’s releases are highly sought-after and rare to find.

Two clips that have fans a tad bit curious about the order of events have emerged of Travis Scott at a Kyrie Irving basketball tournament, at West Orange High School in New Jersey. A week ago, a clip posted on Akademiks Instagram shows a fan attempting to offer the “Sicko Mode” rapper an unknown amount of cash to purchase the impossible-to-find shoes right off of his feet. Showing gratitude, Scott politely rejected the offer. The resell value for Travis Scott’s sneaker collections has easily slid into the thousands.

In another clip shared by OurGenerationMusic of Scott apparently at the same event, he hands a white and blue Nike box holding the rare Jordan 1 Fragments to a fan. Any previous arrangements or Scott’s motive cannot be determined from the video.  We also don’t know if the young man who offered him cash saw Scott’s exchange and decided to take a chance and shoot his shot to get a pair of one of the dopest sneakers out from the designer himself.