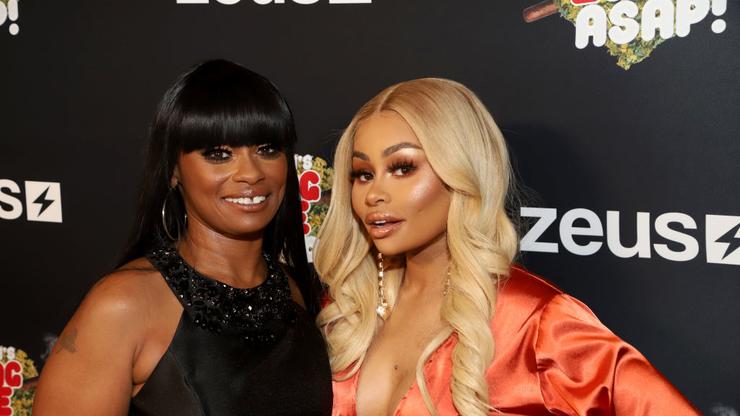 “You’re not a lawyer, you didn’t even go to college. You can’t even put on a pair of clean panties,” Toni wrote to Kim Kardashian on IG after being booted from court earlier today.

50-year-old Tokyo Toni had a lot to say about the Kardashian family on Instagram Live last night. In case you missed it, following yesterday’s jury selection in Blac Chyna’s ongoing case against the reality stars, her mother hopped on social media to make her thoughts about Kris and her daughters publicly known.

As per Page Six, Toni said that the family members who showed up – Kris, Kim Kardashian, Kylie Jenner, and Khloé Kardashian – “looked scary” in real life, and described them as having “dips” in their faces.

“It’s just so sad,” Chyna’s mom continued her rant. “Then Khloé was shaking her f*cking head off everything every juror said. You all right, bitch?” she asked the mother of one. “Did you have some Xanax or something before you got there, bitch?”

Toni appeared to be rolling a blunt during her live stream, and although parts of what she said were incoherent, it’s been reported that she made a comparison between the Kar-Jenner matriarch and “the little man on the tricycle” from the infamous Saw franchise.

The latest update from TMZ reveals that Chyna’s mother’s rant was discussed during this morning’s court session, with the Kardashian’s attorney, Michael Rhodes, informing the judge that “threatening comments” against them had been made online.

It was decided by the judge that Toni would no longer be allowed to attend the trial in person, which she also hopped on Instagram to address. “They put me out the [court] room before I even went in,” she shared earlier today.

“Lol @kimkardashian @khloekardashian, bad enough you can’t read let me put that out there,” her slander continued. “Can you read a book, Kim? You’re not a lawyer, you didn’t even go to college. You can’t even put on a pair of clean panties” – read what else Tokyo Toni had to say below, and check back in with HNHH later for more updates.