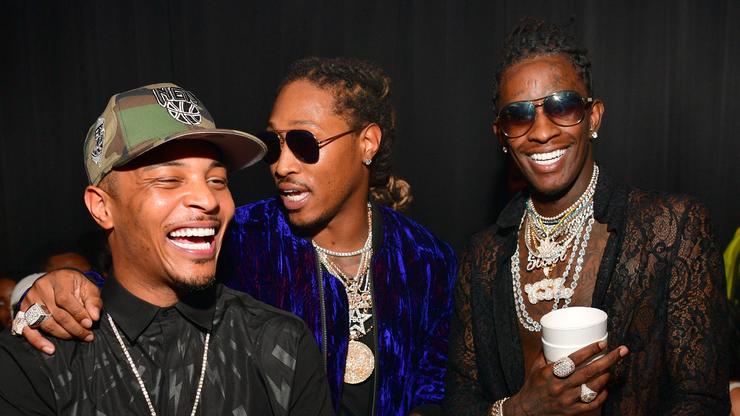 T.I. had some nice things to say about fellow Atlanta rappers Young Thug and Future after Lil Yachty declared that they were “the greatest.”

Lil Yachty thinks Young Thug and Future are “the greatest,” and while T.I. may not go so far as to say all that, he definitely agrees that the two rappers “kings.” On Saturday (July 18th), Lil Yachty took to Twitter to make a statement about two his favourite rappers in the game, whom he seems to think don’t get the respect they deserve. “Young Thug & Future Are The Greatest And Shall Be Respected And Spoken Of Like So…” he wrote.

While it’s unclear what motivated Yachty to come to Thugger and Future’s defence like this, many others would agree with Yachty’s assessment. Young Thug and Future are definitely two the most influential and prolific rappers the past decade, and have some the most dedicated fanbases out there.

One such fan both artists is a legend sorts himself. T.I. commented on Akademiks’ post asking if Yachty was “speaking faxx or fiction?!” writing that Thug and Future are “def two KINGS.”

T.I. has collaborated on a number songs with both his fellow Atlanta natives in the past. A few weeks ago, he shared a tweet Vince Staples‘ in which the Cali rapper declared, “Atlanta got the best rappers ever and it’s not even close.” Of course, T.I. concurred. “Now Cuzz Gets it…..” he wrote. “He know somn….. @vincestaples #SouthGotSomethingToSay.”

Do you agree with Yachty and T.I.?