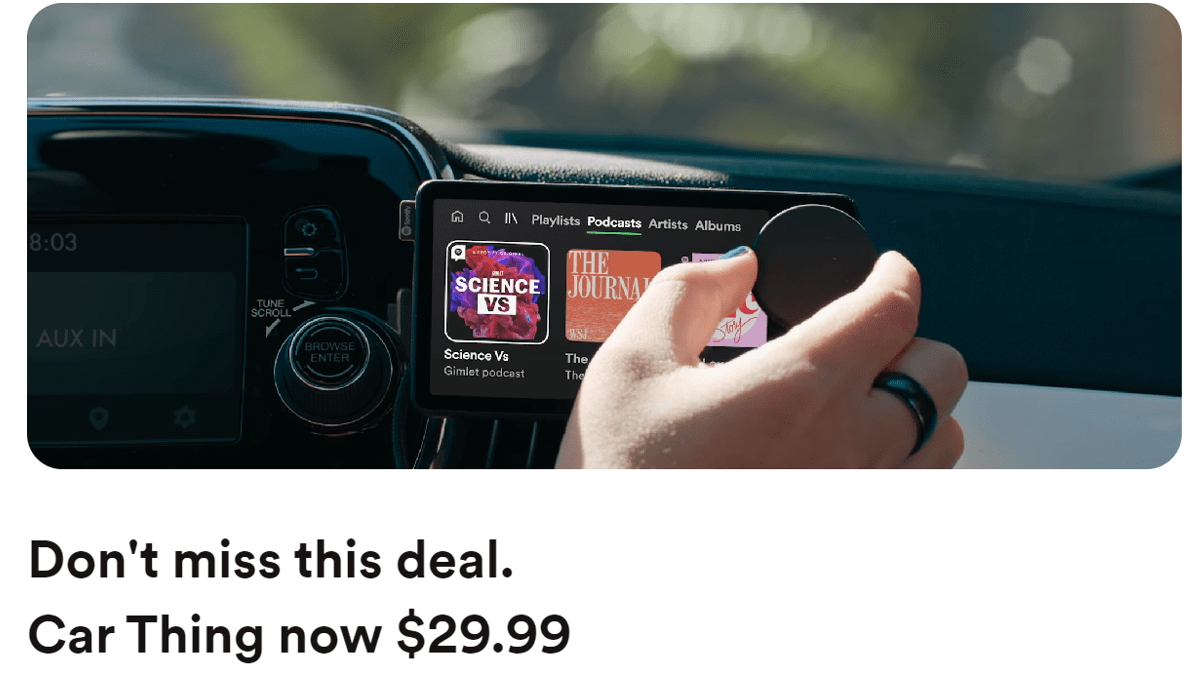 Spotify’s discontinued Car Thing is having a fire sale — now you can buy one for $30.

If Spotify’s previous $49.99 sale price for its now-discontinued Car Thing didn’t grab you, maybe its new price of $29.99 will. After the company announced it would no longer be delving into the world of hardware development, Spotify’s been trying to clear its Car Thing stock — and the price keeps going down.

Spotify has said that existing Car Thing units will continue functioning as intended, so if you’ve been on the fence about trying one, there’s never been a better opportunity. If you enjoy listening to Spotify but don’t have Bluetooth capability in your car, Car Thing might be for you– but be aware that those who tried the device early in its life cycle were largely unimpressed.

Car Thing is intended for use almost exclusively while driving but with voice controls that seem to have been a secondary concern. That means you’ll probably end up tapping the device more than should be necessary, especially while you’re trying to drive. Additionally, some reviews have reported that the interface is laggy or sometimes awkward.

Between less-than-stellar product interest and issues with the supply chain, Spotify discontinued Car Thing earlier this year. Initially, Car Thing sold with a $90 price tag, so the first price drop to $50 marked an improvement, but $30 is even better.

“The goal of Spotify’s Car Thing exploration was to better understand in-car listening, and bring audio to a wider range of users and vehicles,” said Spotify when the company first told TechCrunch of the product’s discontinuation. “This initiative has unlocked helpful learnings, and we remain focused on the car as an important place for audio.”

The company will continue gathering listening data from Car Thing units it sells, and the devices will continue functioning for the foreseeable future. It makes sense why Spotify would strive to sell as many remaining units as possible, especially since they’ve already taken more than a $30 million hit for discontinuing the project.