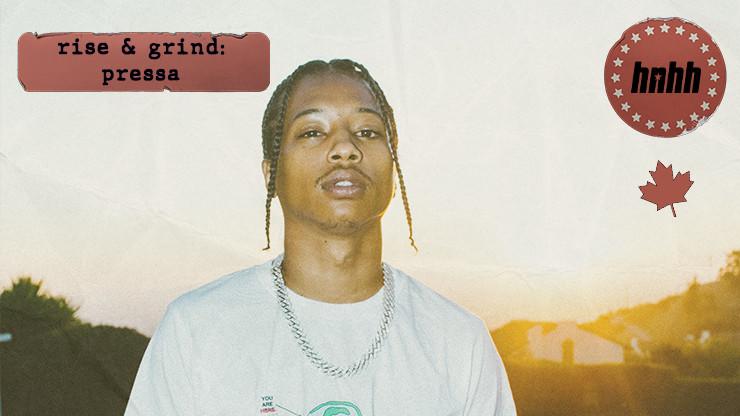 Image provided by the artist. via HNHH

Toronto’s Pressa joins us for this week’s edition of “Rise & Grind” where he reveals why he chose Coi Leray over Pooh Shiesty for the “Attachments” remix, his love for “Snowfall” and the legacy of the late Houdini.

In the past decade, we’ve witnessed Toronto’s grip on the music industry. Boi-1da has been responsible for some of the biggest hits in hip-hop over the course of the last ten years, while Drake and The Weeknd continue to reign supreme on the charts. The generation of Toronto artists that succeed them aren’t necessarily of the same ilk. Artists like Pressa are putting a spotlight on pockets of the city that, prior to their careers, haven’t had much of a voice.

Pressa has been leading the way for a new era of Toronto artists to finally make noise south of the border. Since his rap debut, he’s been at the center of controversy in his city, after he was hit on kidnapping charges that were eventually dropped. During that time, he was free on bail and somehow managed to serve as an opening act for Drake overseas in the UK. And while that did put a lot of heat on both Pressa and Drake, it was a massive stepping stone that helped the budding Canadian artist breakout into the American market with songs like “Headtap” featuring Sleepy Hallow and Sheff G, and of course, “Attachments.” In fact, his celebrity ties run deeper than simply Drake. He appeared alongside a slew of other rappers in Post Malone’s recent video for “Motley Crew.”

Following the success of “Attachments” and its remix with girlfriend Coi Leray, we caught up with Pressa for the latest edition of Rise & Grind where he details growing up in Driftwood, Garner Express, and his relationship with the late Houdini.

Stay tuned for a new installment of Rise & Grind every Monday.

Life in Driftwood was just like — I grew up with just my mama. My dad got life in prison. My dad was kind of popular in the neighborhood so, all his friends used to look out for me, give me money, buy me new Jordans and buy me, like motorcycles. Like, little 50 cc motorcycles and stuff like that. When they’re gambling, they’ll make me keep the money on the pot and stuff like that, you know? Growing up in Toronto is just providing for yourself and your family. So I just always used to just run around, trying to make a dollar however I could.

People die. Like I lost a lot of friends growing up. I was losing friends from when I was like eight years old, you know what I mean? That’s just how it was. I lost older people. Like when I’m 10 years old or something, I’m losing people that are like 20 and 23 years old, and I still look at them like they’re my friends and I still acknowledged their death, you feel me? Even though I’m 10 years old and have nothing to do with what they got going on at the time but that’s just how the neighborhood was like, you would have — we just acknowledge that. That’s just how it is. Just a wild city, you know?

Yeah, I’m a Taurus. I don’t really focus on that but I just get along with people that are the same as me, Taurus’. I can get along with the Taurus’ easily.

Houdini. Lil Baby is really hard right now. He’s one of my favorites right now. Tupac. Biggie is a good rapper, too. He’s dope. Lil Wayne. How can I not say Lil Wayne?

Just coming to America and staying strong. You know out here by myself. Just holding the torch in America. It’s very hard to like even break in America right now.

I’ll be like getting money and driving cars, being in a nice vibe. It’s just America, you know? The party life is 10 times better. It’s a better life for me in America. I can move around and shit. I can move around anywhere in Canada too but it’s just like, I gotta be more on point. I’m still on point in like American and shit but like there are places select to go like by myself out there all the time, you know what I mean? I’ll go places by myself in Canada but like I mean like, I could go to a party by myself here.

I just be freestyling. I just go in there. Whatever the vibe is, I just work all off of vibes.

[Coi Leray’s] dope. She’s a real person and shit. She’s just a genuine person so I fuck with her.

I just thought it was like — she dope. Like, her voice and shit, it’s dope. I thought I could see her on that shit, you know? I was looking for a remix. It was either her or Pooh Shiesty but I thought she would sound better on the record, just melodically.

I used to record on my computer actually. My brother bought me this fire computer. It was like the touchscreen HP when they first came out. I was recording on that shit. We’re just like have like little studios like in n***a’s rooms and shit just recording on there.

My first official studio — I was young as shit. I think when I first came out of jail and then I went to the studio. As soon as I came out of jail, I was like like 15 or something. Actually, when I was young, like 15 officially, I went into the booth.

I just didn’t know what it was gonna be [like opening up for Drake in the UK]. I was just like, I just had like like goosebumps and shit, just kept like jumping around. I told one of my boys to go get me some liquor, like I need some liquor right now before I go on stage, you know? I took like two shots. Like, two, three shots and was just pumped up after. I don’t even know how to like perform before. So, when I went out there I just grabbed the mic and performed. [My voice] was like hella high because I know nothing about a mic. But Baka, he gave me some encouragement like before I went onstage.

Like “man, just chill out” and just, you know. He kind of made me chill out a little bit. Baka was right beside me and he was telling me to chill out and just be chill.

I actually thank God that — I was on house arrest, really. ‘Cause, then I got to go to Europe after that too, but before that, I was running around in the streets all day. If I wasn’t on house arrest, there ain’t no tellin’ what I woulda been doing. I was like, wildin’. I was wildin’ ‘round those times. “Deadmihana” times, I was wildin’ like a motherfucker. I feel like those are the type of opportunities that saved my life.

I was watching “Snowfall.” That’s my favorite shit right now, and now like I can’t wait for like season five or season six.

I got the [Garner Express] deluxe coming out soon-ish. Wait for me.

A few days ago was the one-year anniversary of Houdini’s death. I know you guys had a close relationship. How have you been able to cope with the loss of such a close collaborator and friend while doing what you’re doing right now?

Houdini is just like my brother and shit, besides the music and shit. It’s more personal on some family shit, you know? Losing Houdini is like, fuck, we have so much talent in my neighborhood. Houdini was hella talented, like, one of the biggest talents from my neighborhood. To lose him just kind of pushed us back a little bit, you know? Because we’re doing so good. He was out here meeting people, he was out here in America networking like a motherfucker. Houdini is the type of kid that knows how to lock in and network with people.

I feel like I would have been a bigger artist, as well, with Houdini. Houdini would have went out there and found his own opportunities and his own links and stuff and brought it right back. He could have went and signed a deal and blew the fuck up. It would be two people rather than just me. It was kind of like a break a little bit too because whenever I’m not dropping music, Houdini would drop music. So, it’s not like we’re losing you know I mean? So, it’s not like I drop music and then like another kid from the city drops music and he’s not from my neighborhood. When I’m not like dropping or if I’m not hot right there it’s one of my brothers that are hot. That’s what I like about it. Burna Bandz, everybody.

What’s your favorite memory of Houdini?

Too many moments together to have a favorite.

Gardner Express sounds a lot more polished than your previous projects. What was your approach on this project in comparison to Press Machine or even Prestige?

I was just working with top producers and top engineers. Like, it’s a lot of L.A. production. Before I was just recording in my room. Press Machine, Prestige, all that shit is recorded in my room. So, I’m getting better quality music out of songs that are like in the studio recording on like Sony mics, Paramount Studios. Just hit different.

Is there anything you miss about recording in your, in your bedroom, though?

When we spoke in 2018, you explained how it felt like there was a weight on your shoulder, especially with the way that local media was targeting you. Do you feel like that’s changed since moving to America?

Nah. Well, that shit don’t apply to me in America because they just treat me like a regular civilian out here. Back home is where they try to set boundaries on me and tell me what I can, and what I can’t do, and shit like that. They just be on me. There’s nobody here writing fucking random stories, you know? Like I’ll be in Canada and a reporter just writes up an article out of nowhere. I wake up to an article. Here, there ain’t nobody blogging me or nothing in America when I just wake up and they’re talking a bunch of shit. Like, my father down for murder, my brother, all this shit that’s not about me. Every time they write new shit, it’s all about people around me, or something. It’s never like directly about me. There’s no article saying I did this, did that. They just find ways to fit my name in this shit, you know, because my name will sell as a story.

You also mentioned to me then how you were only performing in Toronto if you can pop up during other people’s sets. With the way everything is happening in your career right now do you think there will be a day where you’ll be able to perform in your hometown?

Yeah, for sure. I will perform in my hometown one day. I’m gonna do a whole Canadian tour.

Is that what’s up next this fall?

No, no. I am just trying to figure it out now.