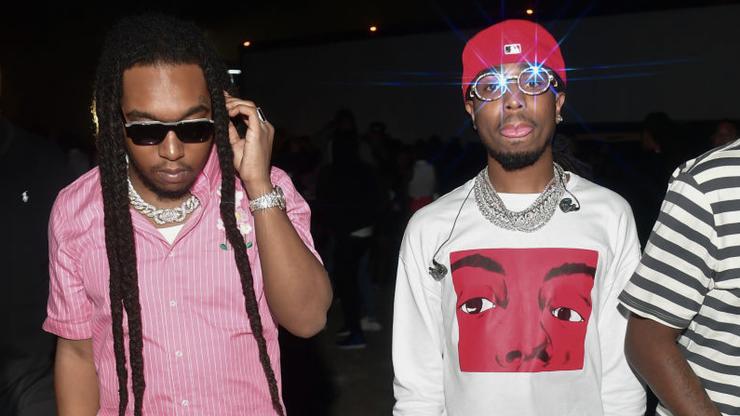 Moneybagg Yo and Kodak Black’s new collab is another must-stream from this week.

Taking the lead on this weekend’s Fire Emoji update is Quavo and Takeoff, who shared their new single “Hotel Lobby (Unc and Phew)” sans the third member of their Migos crew, Offset.

As we previously reported, Q didn’t speak on the drama when TMZ brought it up to him recently, although DJ Akademiks has said that he’s been in contact with the father of five, and doesn’t believe whatever they’ve got going on will lead to a full-scale breakup; more likely, he said, they’re just trying to stir up buzz for the fire new track.

Yet another impressive collaboration this weekend comes from Moneybagg Yo and Kodak Black on “Rocky Road,” which finds Bagg readying himself to step into a new sonic era. On the nearly three-minute-long title, he spits about his girlfriend, Ari Fletcher, wanting another baby, although his priorities currently lay elsewhere.

“Ari want another baby but I’m too busy chasin’ paper / Well, maybe, not right now, perfect timin’ might come later / If that’s yo’ n*gga, push ’bout him, shouldn’t be no favour for a favour / Stand on business, leave no witness, told them members that verbatim (Word for word),” the 30-year-old rhymes.

Our final selection is “Bad For Me” by Kevin Gates, which finds the recording artist reflecting on the woes of a toxic relationship.

Last weekend, we added new titles from Kendrick Lamar, Kodak Black, Post Malone, Roddy Ricch, and Taylour Paige – check them all out for yourself below, and tap back in with HNHH tomorrow afternoon to stream our weekly R&B Season update.