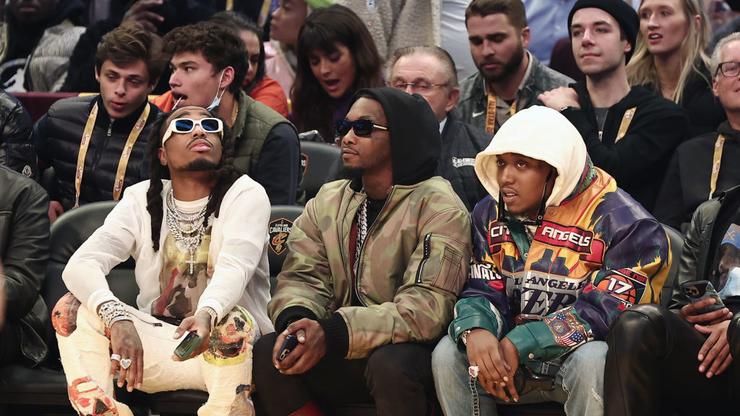 The controversial content creator told TMZ that he thinks Takeoff and Quavo are just drumming up attention for their new single.

While breakup rumours are not uncommon in the hip-hop community, gossip about musical groups splitting up is usually far more devastating than word of a couple calling it quits. Recently, there has been chit-chat floating around online about the possibility of a Migos breakup, and a clip of Quavo answering questions from TMZ didn’t do anything to put out the burning fire.

As we previously reported, cameras caught up with Q at the airport after he and Takeoff released their new joint song, “Hotel Lobby.” Online sleuths noticed that a few of the rap group members appeared to have unfollowed each other, but when Quavo was asked if he had anything to say on the rumoured beef, he kept it cool and replied with, “Nah” before promoting his new single.

Earlier this weekend, DJ Akademiks dropped by TMZ to discuss all the Migos drama – among other things – and according to him, fans of the trio have nothing to worry about.

The content creator revealed to the publication that “he actually spoke to Offset just the other day, and while there might be some tense feelings, he doesn’t think any ‘beef’ will escalate to a full-scale split.” Ak seems to be under the impression that the musicians are just “stirring up buzz” for their latest endeavours.

Elsewhere in his interview, Akademiks addressed the backlash he found himself facing while sharing claims about the Megan Thee Stallion and Tory Lanez shooting case – check it out below, and tap back in with HNHH later for more hip-hop news updates.