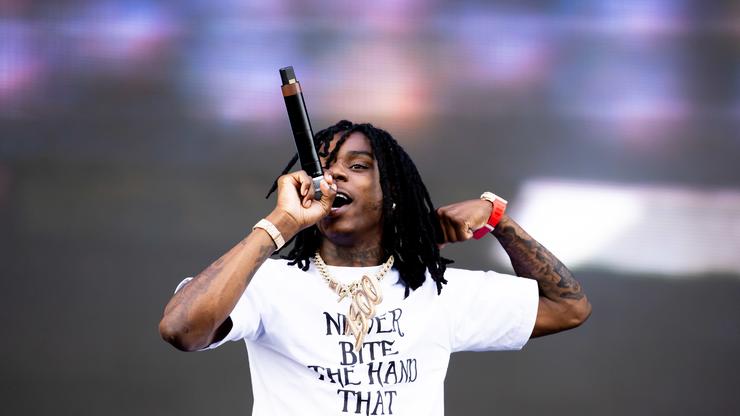 Polo G says that “Hall of Fame 2.0” will arrive in a “fewmoeweeks.”

In addition to competing on the charts, several of Hip-Hop’s biggest stars also compete with each other to see who can get their hands on the most creative and flashy jewelry. Over the past weekend, Drake celebrated his 35th birthday, and he was gifted several expensive chains from the likes of Young Thug and Jas Prince. Last month, Coi Leray even proclaimed that she had the best chain in the game.

Now, Polo G has updated his chain collection with a colossal chain inspired by his recent chart-topping album, Hall of Fame.

In his two latest posts to Instagram, Polo G proudly showcases his new chain, which was reportedly crafted by celebrity jeweler Elliot Eliantte. The first post is a video that shows the chain in detail, revealing a remixed take on the NBA’s coveted Larry O’Brien Championship Trophy as well as two exploding Luc Belaire Bleu bottles. In the second post, fans can see Polo G rocking the chain for the first time, in an a khaki outfit that incorporates Travis Scott’s latest Air Jordan 6 collab.

Take a look at Polo G’s enormous, iced-out Hall of Fame-inspired chain below.

While the Elliot Eliantte-commissioned piece is definitely eye-catching, one can’t help but notice that Polo G also used his latest Instagram post to promote a project titled Hall of Fame 2.0. It is not yet clear whether Hall of Fame 2.0 is a full-length sequel to his third studio album or merely an expanded deluxe version, but according to Polo G, fans should expect it to arrive in a “fewmoeweeks.”

Keep it locked to HNHH for any Hall of Fame 2.0-related updates.