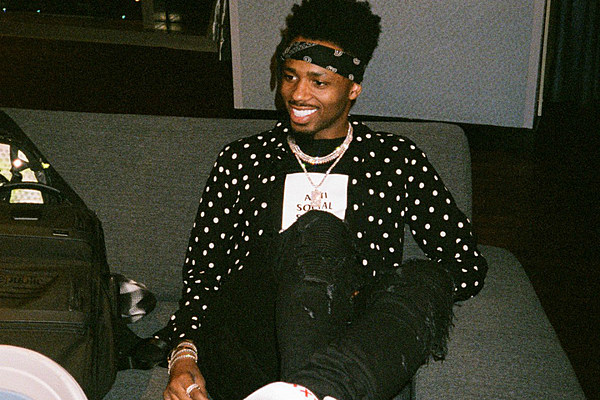 Metro Boomin has become a master collaborations. Last year, he teamed up with the likes Big Sean, Offset, 21 Savage, and NAV on a series high-powered joint projects. This year, he’s trying something new, joining forces with Gap as the music director behind the brand’s new Grammy Remix campaign.

For Boomin, the campaign represents a new stage in the evolution his career. “I love taking on new experiences and endeavors,” he tells XXL in an interview about the initiative. "It’s just a blessing to be able to have that kind impact on the campaign."

Armed by his signature sound, the St. Louis producer—who’s crafted hits for Drake, Future, Kanye West, and The Weeknd—was tasked with remixing UK band Thompson Twins’ classic 1983 single “Hold Me Now” as part the campaign. The result is a bounce-driven track, complete with vintage vocals over trap instrumentation.

“To remix the song, it was really about the original] track leading the direction,” he says. “I kept the rhythm the song more uptempo, more their style, with that old-school feel. But I put the 808s on it just to have that bounce. It was about mixing both worlds but not really losing the essence the original.”

Metro isn’t the only musical titan to partner up with Gap. In November, the brand linked up with Future and Cher, who performed Sly and the Family Stone’s “Everyday People” as part the company’s “Meet Me in the Gap” commercials. Nas, LL Cool J, and Common are also among the hip-hop heavyweights who’ve participated in similar partnerships with the retail giant. Understanding this, Boomin is pleased to join the ranks.

“It’s Gap,” he says. “I have a lot respect for the brand so I’m more than happy and honored to be a part this.”

For SZA, the campaign leads up to what could be a big night at the Grammys on Sunday (Jan. 28). The Top Dawg Entertainment/RCA songstress is up for five nominations—the most among all women—for her work on last year’s Ctrl. That includes Best New Artist, Best R&B Performance for “The Weekend,” Best R&B Song for “Supermodel,” Best Urban Contemporary Album for Ctrl, and Best Rap/Sung Performance for “Love Galore” featuring Travis Scott. Beyond that, New Jersey-bred singer is also set to grace the stage.

Watch the ad for Gap’s Grammy Remix campaign, which is meant to celebrate “music, fashion and the culture now,” below, and check out the full commercial when it's unveiled during the Grammys this Sunday. —Andres Tardio