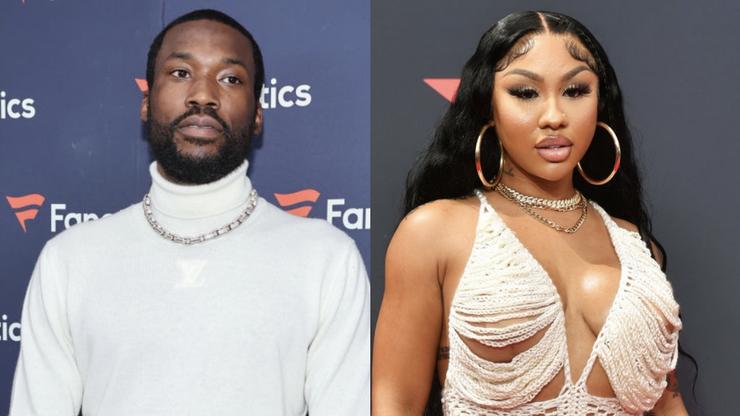 After Moneybagg Yo briefly shared a photo of a woman’s baby bump, some have been speculating that Fletcher could be carrying the Tennessee-born rapper’s child.

Ari Fletcher has been a busy woman lately – or that’s what internet sleuths have been speculating, anyway.

Weeks after the mother of one seemingly confirmed her separation from Moneybagg Yo, declaring herself “single” and denying claims that the Tennessee-born rapper had the vehicle he bought her repossessed, she’s been sparking relationship rumours with yet another famous recording artist – Meek Mill.

Over the weekend, both Fletcher and the “Going Bad” hitmaker posted photos in similar-looking hotel rooms, featuring a beautiful city view and an unmissable pink couch located right by the window.

While the pictures are taken from different angles (Meek’s simply shows off his room while DJ Khaled and Vory’s “GRATEFUL” plays, and the socialite posed on the couch in a black and white outfit, holding up her designer purse to flaunt it for the camera), and even the views from outside the window look different, some have still been insisting that Fletcher has cozied up to a new man.

Luckily, the 35-year-old addressed the gossip on Instagram, responding to a post from a blog with, “Take this cap down, and I don’t immediately follow up on n*ggas old ladies that’s good with me.”

Fletcher may not be spending time with the Champions artist, though some have been suggesting that she may have reunited with her ex after Bagg briefly shared a photo of an anonymous Black woman’s budding baby bump on his Twitter page on Monday (September 12) – read more about that here, and tap back in with HNHH later for more pop culture news updates.