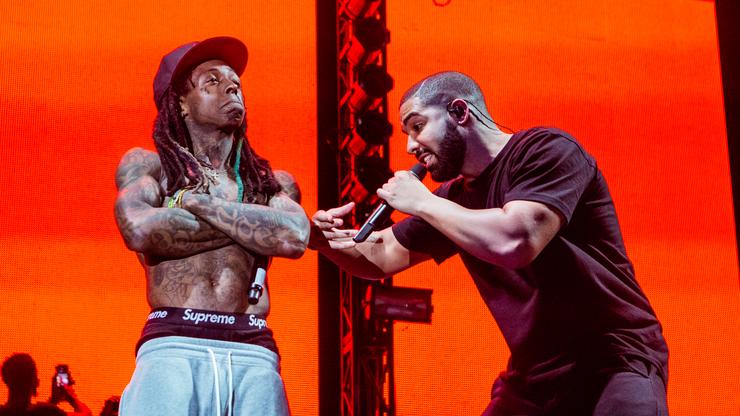 Weezy F. Baby returned to Canada for the first time in years this past weekend. Well, he did pull up to Toronto the week prior briefly before Drake announced that he tested positive for COVID. Anyways, fans embraced Lil Wayne during his recent appearance at the Young Money Reunion before Weezy linked up with legendary Canadian music outlet, Much Music, for a brief interview.

The rapper answered questions related to Drake‘s homeland throughout the interview, including some of his favorite artists outside of his well-known protege. Despite frequently collaborating with him over the years, Wayne admitted that he was not aware that Justin Bieber was Canadian. Wayne professed his love for some of Canada’s most prominent pop stars, like FeFe Dobson and Avril Lavigne.

“Shout out Avril. I had to sing ‘Sk8r Boi’ on Masked Singer. Also, she sung my verse while she was on tour with MGK. But, my favorite Canadian artist — I’m sorry — Kardinal Offishall,” he said before encouraging those who were unfamiliar with him to “Google it.”

Kardi shared a response on Instagram shortly after, writing, “Maximum respect to one of the greatest of all time @liltunechi.”

“Between @champagnepapi and Lil Wayne showing me so much love over the past couple weeks, I’m telling you I’m just grateful to keep receiving these flowers while I’m alive to smell them. All praises due. No pun intended,” he wrote. “No gimmicks or marketing or viral moments will ever get you the respect of the people. Earning the respect from the people you respect is the greatest gift…thank you.”

Lil Wayne and Kardinal Offishall previously connected on Trae Tha Truth‘s “Colorful Clothes,” as well as Barrington Levy’s “No War.” However, they never actually locked in together. Perhaps, Wayne’s visit to the presented an opportunity for the two legendary figures to lock into the studio to cook something up for Tha Carter VI.