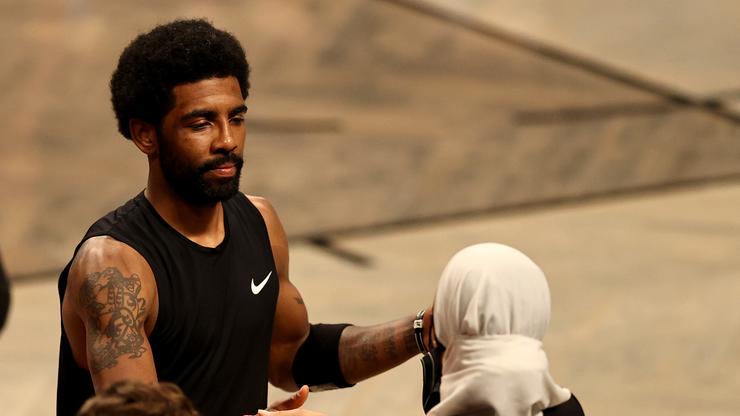 After ranting against the sneaker, Kyrie seems to be warming up to his new signature shoe.

Kyrie Irving is a player who wears his emotions on his sleeve and if there is something he doesn’t like, he is going to speak up about it. Sometimes, his opinions can get him into trouble while other times, fans are simply left scratching their heads at his logic. More recently, Kyrie opened up about the design of the Nike Kyrie 8 and how he didn’t approve of anything that Nike had done. Eventually, the entire debacle was cleared up and since then, Kyrie has given the Kyrie 8 his stamp of approval.

This past week, Irving was engaging in a training session where he was photographed by Trey Mena. The photographer put the images on his Instagram account as many fans noticed, Kyrie was wearing the Nike Kyrie 8 in a unique blue, black, and white camo colorway.

The shoe has a very similar vibe to some of the other Kyrie models, and if you’re a hooper, you know just how well these shoes tend to hold up out on the court. Kyrie is a guard who is always moving around the court so it’s no surprise that he continues to churn out durable shoes that are for the more versatile and crafty players on the floor.

For now, there is no release date associated with this shoe, so keep it locked to HNHH as we will be sure to bring you all of the latest updates from around the sneaker world. In the meantime, let us know what you think, in the comments below.