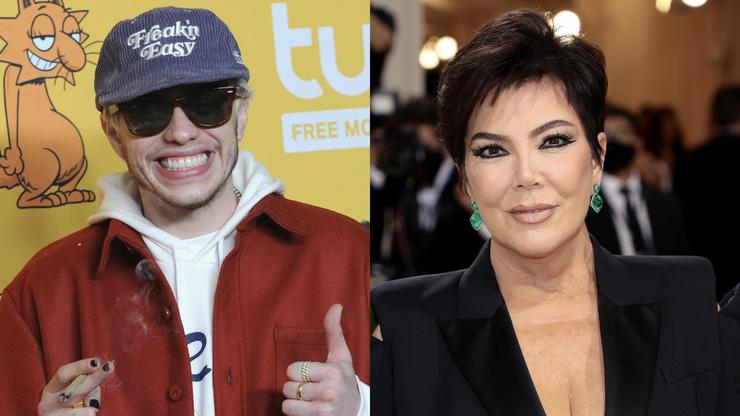 Kim Kardashian’s mom is feeling good about her new relationship.

Pete Davidson has the golden seal of approval from his girlfriend’s mom, it seems. Over the weekend, E! News shared a story stating that a source had revealed that the Kardashian matriarch is “already obsessed” with the 28-year-old comedian.

“The whole family is a fan of Pete’s and would love to spend a holiday with him,” the insider also mentioned. The last time we saw Jenner and the Saturday Night Live star together was when she hosted a birthday party for him at her mansion in Palm Springs – also attended by the legendary Flavor Flav – just weeks into his new relationship with socialite Kim Kardashian.

The past few months have been something of a whirlwind for the newfound lovers. They first made headlines with a kiss during a skit on SNL when the mother of four made her hosting debut, and not long after, they were photographed holding hands on a rollercoaster at Knott’s Scary Farm during the Halloween season.

Page Six reports that they recently attended a packed movie screening at a Staten Island movie theatre. The weeks between now and their first date have seen them on several other outings in Davidson’s hometown, as well as in Kardashian’s usual residence of Los Angeles. At one point, The King of Staten Island actor was seen sporting a hickey on his neck.

While the SKIMS founder keeps busy in the honeymoon phase, her estranged husband Kanye West has been persistently begging her to reconcile with him, even sharing a Thanksgiving prayer admitting to some of his largest faults and serenading her during his legendary Free Larry Hoover benefit concert which he co-headlined with Drake.

Kardashian has made it abundantly clear that she sees no possibility of reconciliation between she and the father of her children, who’s confessed to publicly embarrassing his partner on more than one occasion. In fact, following Ye’s plea for the 41-year-old to “run right back to [him]” on stage, she filed to be declared legally single ASAP – read more about that here.