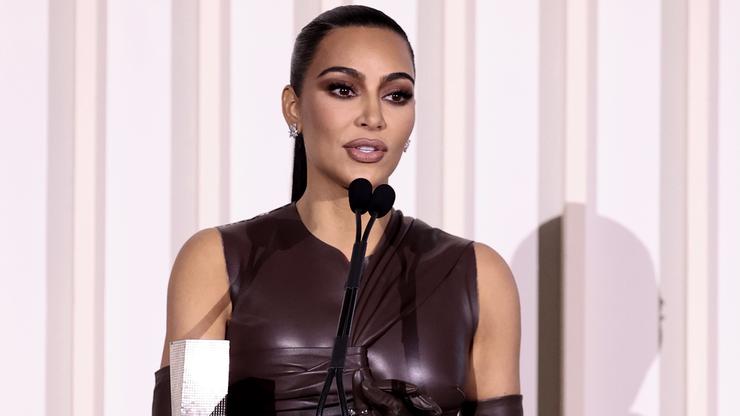 Kim Kardashian spent her Monday evening at New York’s Museum of Modern Art, attending WSJ Magazine’s 11th annual Innovator Awards. The 41-year-old had the honour of being named 2021’s Brand Innovator, but when she was headed up to the stage to give her speech, KKW nearly suffered from a major fashion faux pas.

According to Page Six, a zipper at the bottom of Kardashian’s brown leather dress (a piece from her new collaboration with luxury house, Fendi) began making its way upwards, nearly revealing the reality star’s bodacious behind. Thankfully, the socialite was seated next to her pal, fashion designer Kim Jones, who has able to quickly take care of the “fashion emergency,” as she called it.

“I’d like to thank Kim Jones, because I just had a little fashion emergency,” the recent host of Saturday Night Live told audiences when she finally graced the stage. “Thank God I had Skims under – because this would’ve been a different kind of show tonight.”

At the time of her wardrobe malfunction, Kardashian and Jones were also seated with actress Demi Moore, who reportedly sprung into action, ready to assist with the troublesome zipper. Lil Nas X and Lewis Hamilton were also seated at the table, getting a front row seat to all the drama.

“I just remember 15 years ago when I was starting my career, I could’ve never dreamed that I would have been getting an Innovator award for brands,” the California-born star said during the ceremony last night. “I mean back in the day, I would’ve been the face of any brand that asked me. I did, like, cupcakes to weight loss pills all at the same time.”

The innovator then went on to tell audiences that she felt inclined to create SKIMS because she struggled to find shapewear that was the right shade for her skin. “I thought, ‘If I can’t find my shade, how will my friends? How will my daughter?’ It just seemed insane to me that other options weren’t available. So I always like to come up with solutions.”

Seeing as Kardashian made her way to New York just days after she was spotted holding hands with Pete Davidson on a rollercoaster, the internet has been speculating whether the two mega-stars will link up this week. What do you think?