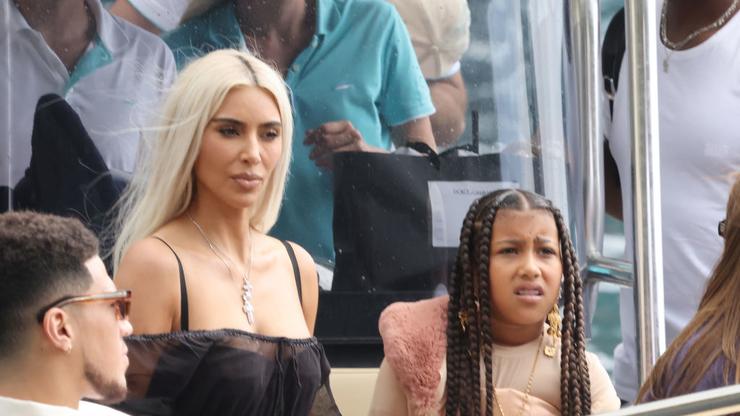 North headed overseas with her mom to attend her aunt Kourtney’s Italian wedding.

Seeing as things are continuing to heat up between Kim Kardashian and Pete Davidson, many fans were expecting to see the 28-year-old in attendance at the socialite’s older sister’s wedding, but alas, the filming of his final episode of Saturday Night Live got in the way. Nonetheless, the 41-year-old still managed to secure herself the best possible date.

On May 29th – a week after all the festivities – Kim dropped off a heartwarming series of photos with her eldest child, 8-year-old North West, posing with her in Italy. “Best Date Ever,” she wrote in the caption.

While North was photographed with her mom on several occasions during the vacation, this one appears to be from when the Kardashian-Jenner clan first arrived in Italy, based on the SKIMS founder’s Dolce & Gabbana cutout catsuit.

For the young girl’s part, she also dressed in a monochrome fit, pairing jeans and a black short sleeve top baring a cross on the front with some kitten-heeled strappy sandals and her beautifully braided hair.

Sources told E! News that that same night, “The family booked out the entire restaurant for [their] celebration,” adding that “The menu included handmade troife pasta with pesto, baked seabass, fresh fruit and coffee parfait with coffee liqueur. The meal was also paired with a selection of three Italian wines.”

That’s not the only fine dining that North has been doing as of late – days ago she was spotted heading to NOBU with her dad, Kanye West for a lunch date.

Not long after that, the father of four dropped off “True Love” with the late XXXTentacion, on which he addresses his custody battle with Kim – read more about that here, and tap back in with HNHH later for more pop culture news updates.