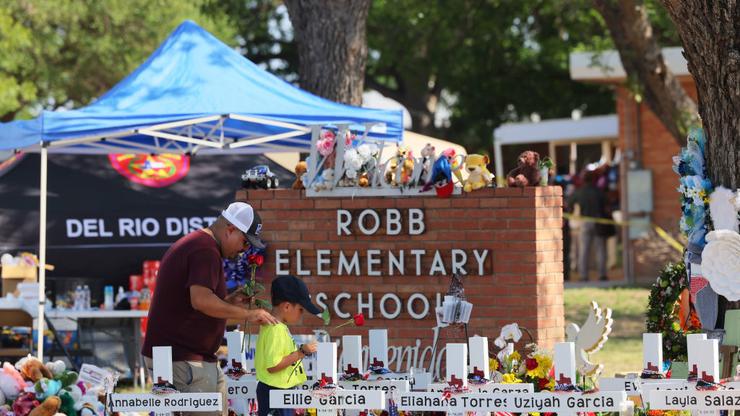 President Biden paid a visit to Uvalde with FLOTUS this weekend.

Joe and Jill Biden headed to Uvalde, Texas, on Sunday, where they paid their respects at Robb Elementary School after an attack by 18-year-old Salvador Ramos left 19 children and two teachers dead on Tuesday. Along with the President’s visit today, the Department of Justice announced that they’ll be conducting an official review of local authorities’ handling of the incident.

Days after the mass slaying, a timeline was released to the general public revealing that it was over an hour after the gunman entered the school at 11:33 AM that he was killed. The same report also noted that a police officer drove right past Ramos in the parking lot without asking any questions, and instead, stopped a teacher.

Many have expressed discontent with the amount of time it took police to engage the gunman – vigilantes and parents outside even offered to go in themselves long before Ramos was killed.

“The goal of the review is to provide an independent account of law enforcement actions and responses that day, and to identify lessons learned and best practices to help first responders prepare for and respond to active shooter events,” the DOJ has shared, as per TMZ. It’s also been noted that Uvalde Mayor Don McLaughlin was the one to request the Critical Incident Review.

The department hopes to help the agency find any failures they can improve upon next time while remaining completely impartial and fair to the facts of exactly what happened.

“Of course, the community is outraged that 19 cops stood around for about an hour before a Border Patrol tactical unit took the gunman out themselves, disobeying orders to stand down,” the publication notes.

Check out the full timeline of the Robb Elementary School mass shooting here, and tap back in with HNHH later for more news updates.