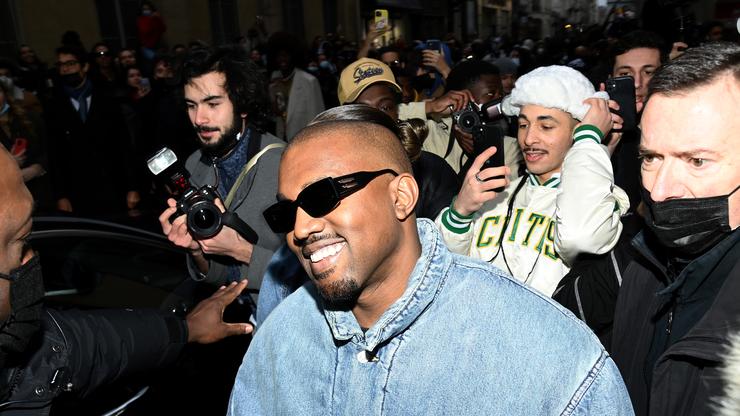 If there’s one thing that’s clear, it’s that Kanye West is never on Instagram when things appear to be going well in his life, professionally or personally. This year, in particular, the social media platform became his main tool to air out his grievances, whether that’s his issues with Drake, Kim Kardashian, or Pete Davidson. The latter is apparently in trauma therapy for Ye’s online antics.

Ye arrives to the arena for the fight between Jamel Herring and Shakur Stevenson at State Farm Arena on October 23, 2021 in Atlanta, Georgia. (Photo by Brandon Magnus/Getty Images)

Today, Kanye West continued to take on the powers that be at Adidas, specifically Kasper Rørsted, who announced that he’ll be stepping down from his position in 2023. Ye shared yet another fake New York Times headline to his IG page, reading, “Kasper Rørsted Also Dead at 60” — a reference to the controversial post he shared following Pete and Kim’s split. The fine line for the fake frontpage also takes a jab at Kid Cudi, who he previously shaded in his RIP post for Pete Davidson.

“I know what you’re thinking…who is Kasper? but even less importantly who is Kid Cudi?”

Ye’s been critical of Adidas in recent times, especially as they’ve tinked with the Yeezy brand without Ye’s approval. They launched a Yeezy Day in August, which Kanye West disproved.

“Adidas made up the Yeezy Day idea without my approval,” he wrote in a message to Complex.

As for Kid Cudi, it seems like Kanye West is still in his feelings about being called a dinosaur.