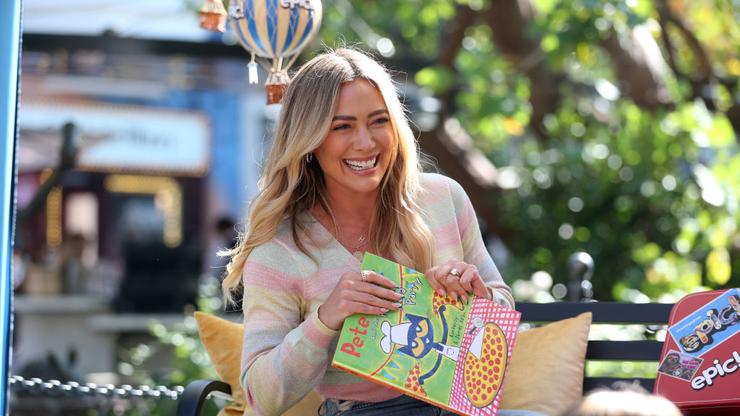 The “Lizzie McGuire” star appeared in a 2008 “Think Before You Speak” PSA, condemning the use of homophobic slurs.

While many former Disney Channel stars have been faced with endless drama and scandals throughout their early adulthood, one who has maintained her place in the public’s good graces is Lizzie McGuire alumn, Hilary Duff.

The 34-year-old actress has been involved with several projects in recent years, including hit shows like Younger and How I Met Your Father, and although her Disney+ reboot of LM never came to be, the mother of three did use social media earlier this week to share an iconic recreation video she made with some friends in which she revisited a 2008 role.

At the time, Duff had been cast in a “Think Before You Speak” PSA in which she reminds viewers of the harms that can come with using homophobic slurs.

While the original ad starred the Houston native alongside other teenage girls, this time around she tapped Pentatonix member Scott Hoying and his fiancé Mark Manio to assist her. “That’s so gay,” one of the men tells the other as he tries on a top. “Really?” the other responds.

“Yeah, that’s so gay,” Maino states again before Duff enters the chat, saying, “You know, you really shouldn’t say that.”

After Hoying asks, “Say what?” the child starlet claps back, “Well, say that something’s gay when it’s bad. It’s insulting. What if every time something was bad, everybody said, ‘Ugh, that’s so girl wearing a skirt as a top?… Those are cute jeans, though.”

After uploading the clip to her TikTok page, Duff offered an explanation in the comments as to why she opted to reimagine the moment nearly a decade and a half later. “@Scott Hoying & @markmanio410 tying the shirt on as a skirt/top made me say yes,” she wrote.

“Also 14 years later – still holds up.” Check out Twitter’s reaction to the comedic pop culture crossover below, and tap back in with HNHH later for more news updates.