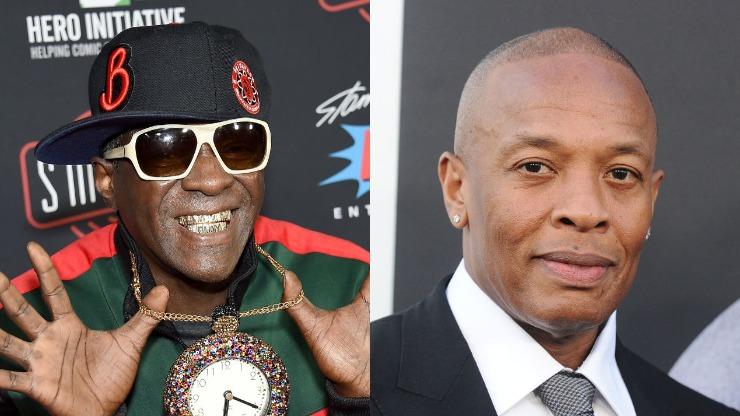 During a conversation with Steve-O, Flavor Flav confirms that he recently recorded vocals for Dr. Dre’s upcoming studio album.

What do we know about Dr. Dre‘s upcoming album, his first since Compton dropped in 2015? So much, yet so little — as per usual, the Doc has opted to play this one close to his chest, though we’ve done our best to compile as much information on the album as possible.

One pattern has emerged, however. Dre appears to be connecting with several of his fellow OGs, playing them the project and allowing them to ramp up hype shortly thereafter. We’ve seen it with Grandmaster Flash. We’ve seen it with Diamond D and Xzibit. Now, Flavor Flav has confirmed his own involvement with the album, revealing that only has he heard it — but that he’s on it.

During a recent appearance on Steve-O’s Wild Ride! podcast, Flav opened up about his experience working with the Doc. “I was just at Dre’s house a week and a half ago,” explains Flav. “One of the best people in the world. I’m honored for him to have had me record something at his house for his upcoming album that’s getting ready to come out. That’s big to me. Flavor Flav on a Dr. Dre album, that’s big to me, bro.”

Of course, it goes without saying that nothing is final where Dre is concerned, and songs can be vaulted without explanation. Still, it’s exciting to hear Flav’s confirmation that the album is indeed “upcoming.” Though this is purely an assumption, it feels safe to suggest that Flav likely recorded a song’s intro or possibly even a skit; lest we forget the cinematic and morbid outro on “Loose Cannons.”

Check out Flavor Flav’s Dre reveal below, and sound off with your predictions on when the anticipated album will ultimately surface.