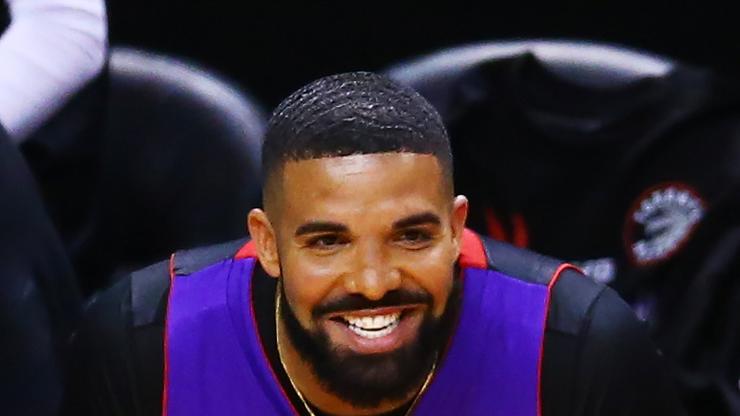 The “In My Feelings” rapper continues to find his long-standing feud with Kanye worth smiling about.

In case you missed it, the decade-long on-again-off-again beef between Drake and Kanye has been reignited ahead of the release of their new albums, Certified Lover Boy and Donda. On Trippie Redd’s newest single “Betrayal,” the Toronto rapper dissed Kanye West and Pusha T (remember when Pusha T destroyed Drake in their rap beef). “All these fools I’m beefin’ that I barely know, Forty-five, forty-four (Burned out!), let it go. Ye ain’t changin’ sh*t for me, it’s set in stone,” rapped Drake.

In a now-deleted post, West responded by posting a screenshot of a cryptic group DM. The message included a photo of Joaquin Phoenix’s Joker character accompanied by the following direct threat, “I live for this. I’ve been fucked with by nerd ass jock n****s like you my whole life. You will never recover. I promise you.”

Next, West made a move that most fans on Twitter found as “taking it too far,” he posted a screenshot of Drake‘s albeit, well-known $100 million dollar Toronto mansion. In response, Drake posted a video of himself laughing on Instagram Stories as he rode through the streets of downtown Toronto.

The antics between two of hip-hop’s highest sellers sparked reactions from others such as Good Music Ghost-writer Consequence, Lil Uzi Vert, and Rick Ross. During an interview on SiriusXM’s The Mike Muse Show, Rick Ross commented on the Kanye/Drake beef, saying that he believes it’s far less personal than the public has been led to believe.

“I love it,” he said about the drama before reading a text that Drake sent him, which said: ‘Everything is unfolding. I’m about to be as free as a bird.’

“And I just, I couldn’t do nothing but put ‘hahahaha’ because to me, I understand the genius to both of these artists, and I understand this is nothing personal to them,” added Rozay. “This is two levels of creativity inspiring each other.

Rozay must be on to something because Drake continues to be all smiles. He recently posted a photo on Instagram stating he has an “emotional budget I can’t go over.” Does this mean he’s done with the Good Music Camp and their pettiness? We will have to wait and find out.

As we recently reported, there have been rumors that Drake has something big coming this weekend as well. Akademiks posted a clip of what is said to be the set of a music video featuring Drizzy, Future, and Young Thug, and according to Ak, the visual for “Too Sexy” will arrive Friday, as well. It is unclear if this single will be featured on Certified Lover Boy or Thugger’s forthcoming Punk project, but if it drops on Donda Day, it will be an interesting moment for fans.