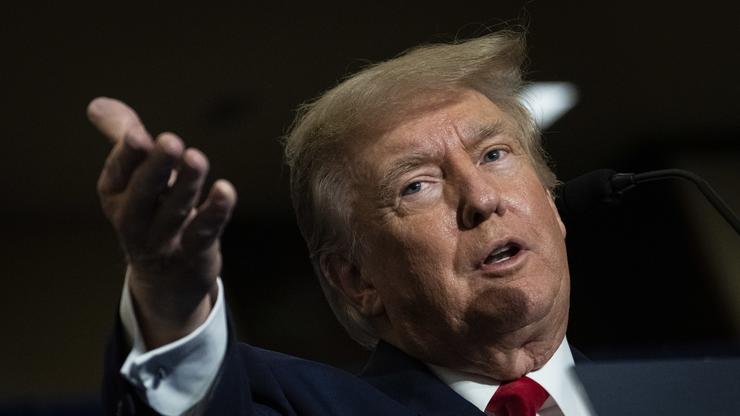 The former president returned to his “law and order” rallying cry in a DC speech.

As the January 6th hearings are revealing, Former President Donald Trump doesn’t take the law too seriously when it’s applied to himself. But Trump has repeatedly made clear that the law should be nothing less than draconian when it comes to people outside his orbit.

He returned to this “law and order” stance in a speech at the America First Policy Institute. In the appearance on Tuesday, Trump said that the death penalty should be imposed for convicted drug dealers.

“The penalties should be very, very severe. If you look at countries throughout the world, the ones that don’t have a drug problem are ones that institute a very quick trial death penalty sentence for drug dealers,” the former president said, characteristically not citing any evidence to back up this very tenuous claim.

He acknowledged this step might sound extreme: “It sounds horrible, doesn’t it? But you know what? That’s the ones that don’t have any problem. It doesn’t take 15 years in court. It goes quickly, and you absolutely– you execute a drug dealer, and you’ll save 500 lives.” Here, he ignored the fact that in the United States the death penalty is an extreme long and costly process. “It’s terrible to say, but you take a look at every country in this world that doesn’t have a problem with drugs, they have a very strong death penalty for people that sell drugs,” he continued.

His call for the death penalty is part of a larger message he’s been harping on as of late: that crime is out of control in American cities, and that there needs to be a swift and punitive crackdown. In addition to killing off drug dealers, Trump discussed placing police cars on every corner and forcing people without homes out of cities and into “large parcels of inexpensive land at the outer reaches of the city.”