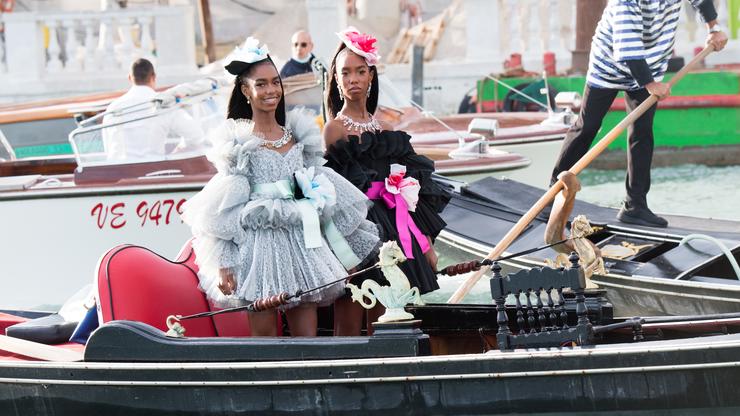 This season’s Dolce & Gabbana runway was sprinkled with plenty of #BlackGirlMagic.

If you noticed that several of your favourite stars have been jetting off to Italy over the weekend, it’s no coincidence. The beautiful city of Venice just welcomed the likes of Jennifer Lopez, Kourtney Kardashian, Christian Bale, Kris Jenner, and more for this season’s Dolce & Gabbana Alta Moda show.

These collections are always inspired by the creative culture and local artisanship of the show’s host city, so each and every garment had an incredibly unique and authentic Italian feel to it. Some of the models, however, were distinctly American.

D’Lila Star, Jessie James, and Chance Combs, the teenage daughters of Diddy, all made their runway debut over the weekend. The twins, D’Lila and Jessie wore matching puffy lace dresses, the former in a sky blue and white colour way, and her sister rocking the black and pink version.

The oldest of the trio, Chance, also wore a dress, although hers was sparkly and adorned with a red bow wrapped around her waist. Diddy posted a photo of the family in their designer duds, captioning it, “Words can’t explain. LOVE.”

It’s only natural that the three sisters would eventually make their way into the fashion industry; back in 2018, Diddy’s son Christian also walked for D&G. Their mother, the late Kim Porter, was known for her work with brands like Tommy Hilfiger and Revlon and their father was an incredibly influential figure in early 2000s American street style.

Plenty of other influential Black women were also in attendance at the event, including Megan thee Stallion, Doja Cat, Jennifer Hudson, Saweetie, Normani, and Ciara. You can check out photos from the Dolce & Gabanna Alta Moda show below.