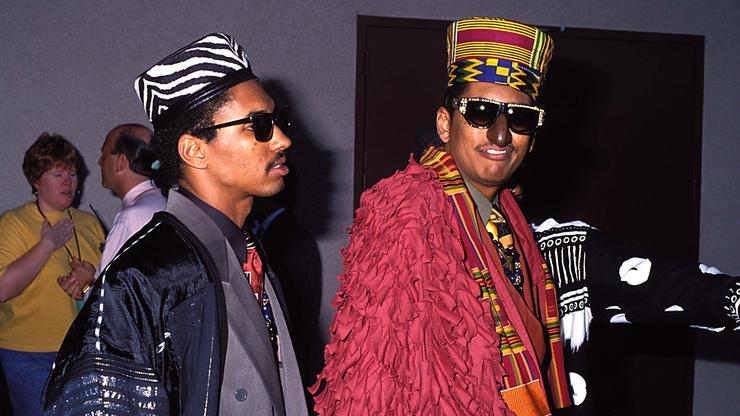 Chopmaster J, co-founder of the pioneering hip-hop group Digital Underground was banned from an event honoring the late Shock G.

In April of this year, the veteran emcee who introduced Tupac Shakur to the world, Shock G, died at 57-years-old of an accidental drug overdose. It had been reported that the rapper had struggled with addiction for years.

Along with producer Chopmaster J, Shock G founded the pioneering hip-hop group Digital Underground. The 1990s hip-hop group is one of the most legendary to emerge from the Bay Area. Known for their 70’s inspired funk West Coast sound, after two decades of touring together, in 2008, the group announced that they would officially disband. Two months after disbanding, they released their sixth and final studio album, ..Cuz a D.U. Party Don’t Stop!

Digital Underground and Fab Five Freddy during Yo MTV Taping of “We’re All In The Same Gang” Video Shoot| Photo by Jeff Kravitz/FilmMagic, Inc/Getty Images

As reported by TMZ, on August 21st, Shock G’s hometown of Oakland, celebrated his life with a city-wide event. The celebration included feeding about 2,000 unhoused community members, a motorcade, live music, performances, speakers, and a DJ-led afterparty. Shock G’s longtime manager, Atron Gregory told TMZ that “Shock had a passion for supporting those who have a hard time supporting themselves.”

“The shockwaves produced by Shock G and digital underground continue to reverberate across the globe with its epicenter right here in Oakland,” stated Oakland City Councilmember Loren Taylor. “Their significant influence on Oakland’s arts, culture, and music scene is unquestionable just like their positive impact on so many lives of people of all cultures and generations.” The city council of Oakland voted to honor the legendary group’s frontman and co-founder, there was no mention of Chopmaster J.

According to TMZ “Digital Underground broke up in 2008 after a fallout between Chopmaster J and Shock G … but while they didn’t speak for years following the breakup, they still considered each other brothers outside the group. Chopmaster J is bummed his contributions to the group’s legacy are not even mentioned in the proclamation. The language’s exclusive to Shock G’s contributions.”

Apparently, the city is currently discussing a separate proclamation for Digital Underground that mentions Chopmaster J.