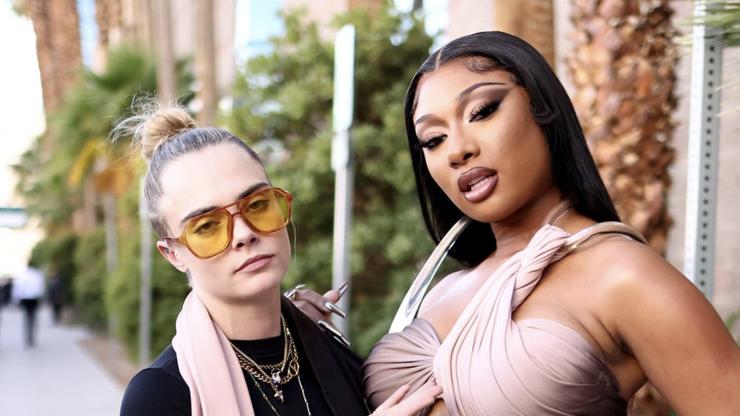 The model went viral after attending the show with the Houston rapper, and now she’s offering her side of the story.

The Billboard Music Awards highlighted several hitmakers during its ceremony, but model Cara Delevingne stole the show due to her interactions with Megan Thee Stallion. The friends appeared on the red carpet together and Delevingne even assisted the rapper with her wardrobe while she posed for photographers. Clips of Delevingne sitting next to Megan in the front row seats and dancing at an after-party immediately went viral, causing a wave of conversations about the model’s behavior.

During her chat with Jimmy Fallon on The Tonight Show, Delevingne explained how she ended up accompanying the “Plan B” star.

“So basically, I was kinda working as her P.A. I kind of needed a side job,” the model joked. “No, but basically, I was in Vegas, we’re friends. I really wanted to see her play, she asked me to come along with her. I was like, I didn’t know I was gonna go and sit or do anything. I thought I was just gonna come and watch her play.”

“She had a speech she was going to do, she was winning awards,” Delevingne added. “I was helping her run her lines, like, I was walking around with a clipboard helping her do lines—not do lines, but helping her memorize her speech. I mean, she was on the red carpet so I was standing behind her, and then she was trying to [adjust her dress] so I was helping her.”

She added that because she didn’t intend to actually attend the award show, she felt out of place but decided to take photos of Megan to support her friend. “People find me odd, but that’s me.”

Watch Cara Delevingne share the story and more below.