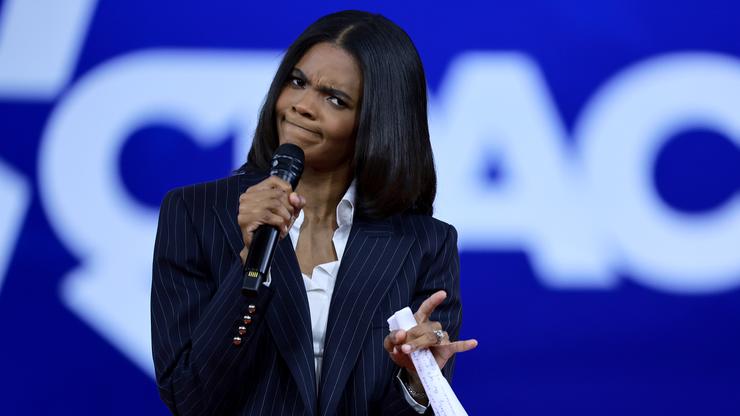 Candace Owens speaks during the Conservative Political Action Conference (CPAC) at The Rosen Shingle Creek on February 25, 2022 in Orlando, Florida. CPAC, which began in 1974, is an annual political conference attended by conservative activists and elected officials. (Photo by Joe Raedle/Getty Images)

The political pundit slammed the famous influencer and momager over Kim’s 2007 sex tape.

Candance Owens never holds back when it comes to sharing her unsolicited opinion. Earlier this year, she took shots at Cardi B and LeBron James, claiming that the Bronx rapper is “uneducated” and the NBA star “has a low IQ.” Despite the backlash, Owens has never backed down from any of her controversial statements about celebrities.

Kim Kardashian and Kris Jenner are the latest stars to catch the wrath of Owens. During a recent episode of her Candace Owens Podcast, the political pundit blasted the popular stars over Kim’s 2007 sex tape with Ray J. While calling the infamous tape “satanic,” Candance added, “There are really no words that can adequately describe how positively disgusted I am by this story, and what this signifies in terms of the world that we are in today.”

Kim and Ray J‘s sex tape made headlines once again earlier this month after Ray J exposed the Kardashian-Jenner clan for lying about their involvement with tape for over 15 years. “I don’t know what the f*** you think this is, but you have f*cked with the wrong person. Period,” he shared.

See what else Candace Owens had to say in the video below.