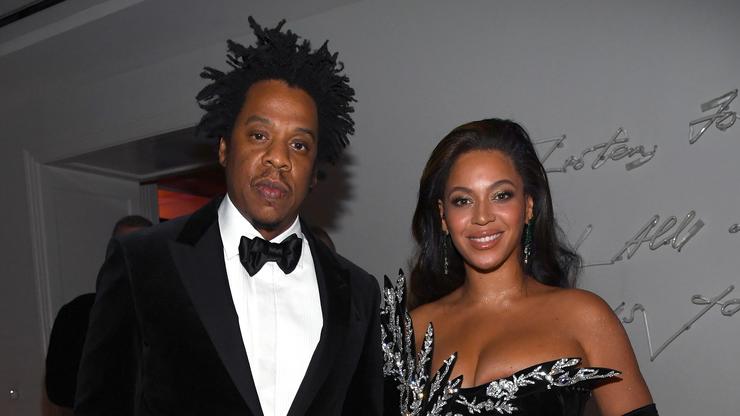 The Carters partner with Tiffany & Co for their ‘About Love’ campaign which features the couple in front of a private collection Jean-Michel Basquiat painting in Tiffany Blue.

Tiffany & Co., the luxury American Jewelry brand has partnered up with hip-hop royalty Jay-Z and Beyoncé to serve as the new face for their “About Love” campaign. The campaign marks a number of firsts, including the inaugural instance of Beyoncé and Jay-Z appearing alongside one another for a creative endeavor of this variety. Photographed by Mason Poole, Beyonce wears a priceless Tiffany diamond, becoming the first Black woman and 4th person to wear the legendary stone since its discovery in 1877, while the couple poses with a never-before-seen Basquiat painting.

The painting is called “Equals Pi” and dates back to 1982. In a conversation with Women’s Wear Daily, Alexandre Arnault, the executive VP of products and communications at Tiffany said, “We don’t have any literature that says he made the painting for Tiffany, but we know a little bit about Basquiat. We know his family. We know he loved New York, and that he loved luxury and he loved jewelry. My guess is that the [Tiffany blue painting] is not by chance. The color is so specific that it has to be some kind of homage.”

Many on social media were impressed by the painting, and specifically, Jay-Z’s calculated creative investments (Basquiat styled-hair in front of a Basquiat painting) while others didn’t quite understand the hype.

The “About Love” print campaign is set to launch in early September and an accompanying video component will air on Sept. 15. As part of Tiffany’s collaboration with the Carters, the brand has also committed $2 million toward scholarships and other programs at HBCUs.