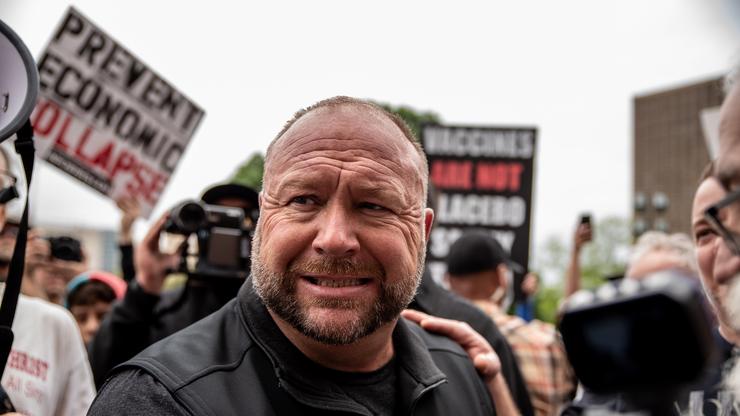 The far-right conspiracy theorist reportedly told police that she hit him over the head with a bottle after accusing him of cheating on her.

The holiday season hasn’t been all pine trees and holiday lights for Alex Jones. The famed conspiracy theorist and Infowars founder’s antics have caused him to become a spectacle, but this time reports state that it was his wife, Erika Wuff Jones, who found herself in trouble with the law. More information is being shared about the Joneses and the alleged physical altercation that took place on Christmas Eve at their home.

The incident was reported on by several outlets, but The Daily Beast reportedly viewed documents from the police. According to the publication, Erika was accused of striking her husband “over 20 times” and threatening him with a stone ball. She reportedly told Alex that she would hit him in the head with it, resulting in the far-right commentator to “fear for his life.”

Wulff Jones was arrested on a domestic violence charge for that Friday night altercation at the couple’s home outside of Austin, Texas. Following the Christmas Eve incident, Jones told the Associated Press: “It’s a private family matter that happened on Christmas Eve. I love my wife and care about her, and it appears to be some kind of medication imbalance.”

When authorities arrived at the home, Alex’s hair was reportedly “red” and “wet,” and he is said to have told officers that “Erika had hit him with both closed fists and open hands on his head in front of their child.” She was apparently upset because she reportedly believed that Alex was being unfaithful and in turn, the disagreement allegedly turned physical as they were giving their child a bath.

Erika stands accused of striking her husband over the head with a bottle and chasing after Alex when he attempted to flee the scene. Meanwhile, Erika reportedly told authorities that she didn’t threaten her husband, nor did she assault him. An officer noted that he could smell alcohol on her breath. She was arrested and reportedly charged for resisting arrest and assaulting her husband. Alex later claimed that Erika lost it because she accidentally mixed up her medications.

“So, that’s what happens when someone has a chemical imbalance after surgery and the medication they had mixes together,” Jones said. “They literally go to cuckoo world, cloud cuckoo.”