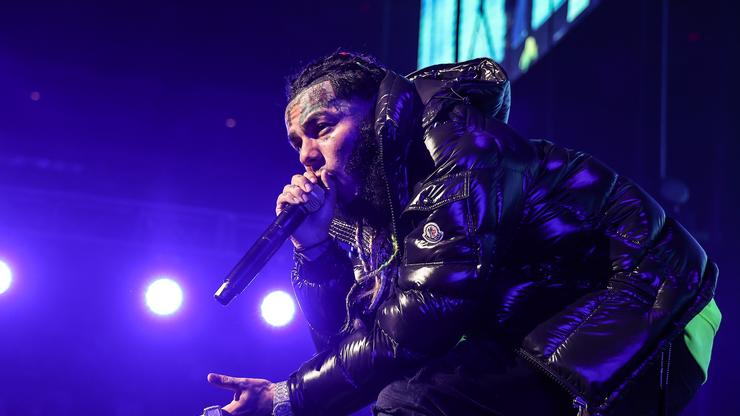 When 6ix9ine was kidnapped years ago, he faced backlash over being “caught lacking,” but he wonders why “favorite rappers” don’t face the same ridicule.

Another Off The Record clip has captivated Hip Hop. Tekashi 6ix9ine recently burst back onto the scene with a new single and as always, each emergence arrives with controversy. He’s been targeting artists like Fivio Foreign and attempting to bait the B.I.B.L.E. rapper into beef, but Fivio won’t bite. Aside from that drama, 6ix9ine visited DJ Akademiks’s podcast and passionately spoke about being ridiculed when he was kidnapped by his own associates.

During that time, 6ix9ine faced jibes about being “caught lacking” and not being aware or armed to defend himself. Now, he questions why he has been the subject of backlash while slain artists like Nipsey Hussle, Pop Smoke, and King Von were never posthumously accused of lacking in any sense.

After the fiery clip went viral, 6ix9ine returned with a comment that he hoped people would understand.

“My point is for the people who don’t understand ‘ I WAS LACKING WHEN SH*T HAPPEN TO ME‘ it happens to the best of us TO THE BEST,” said 6ix9ine. “So why single me out?? when your favorite rapper gets caught lacking and doesn’t survive the situation they are never spoken down on .. I guess it’s just that it’s cool to hate on 69 now.. witch is cool idc but understand my point it’s not a math problem. It’s simple common sense.”

“When it’s me people say ‘that would never happen to me’ WHEN THEY FAVORITE RAPPER GETS KILLED LACKING it’s always…. ‘unfortunate or it doesn’t matter it’s different’ [crying laughing emojis] PEOPLE PICK AND CHOOSE… hating on 69 makes u cool I guess.”

Blueface chimed in to say, “Y does 69 think somebody else is supposed to care or do some to him other then the people he told on [shrug emoji].” Check it all out below.