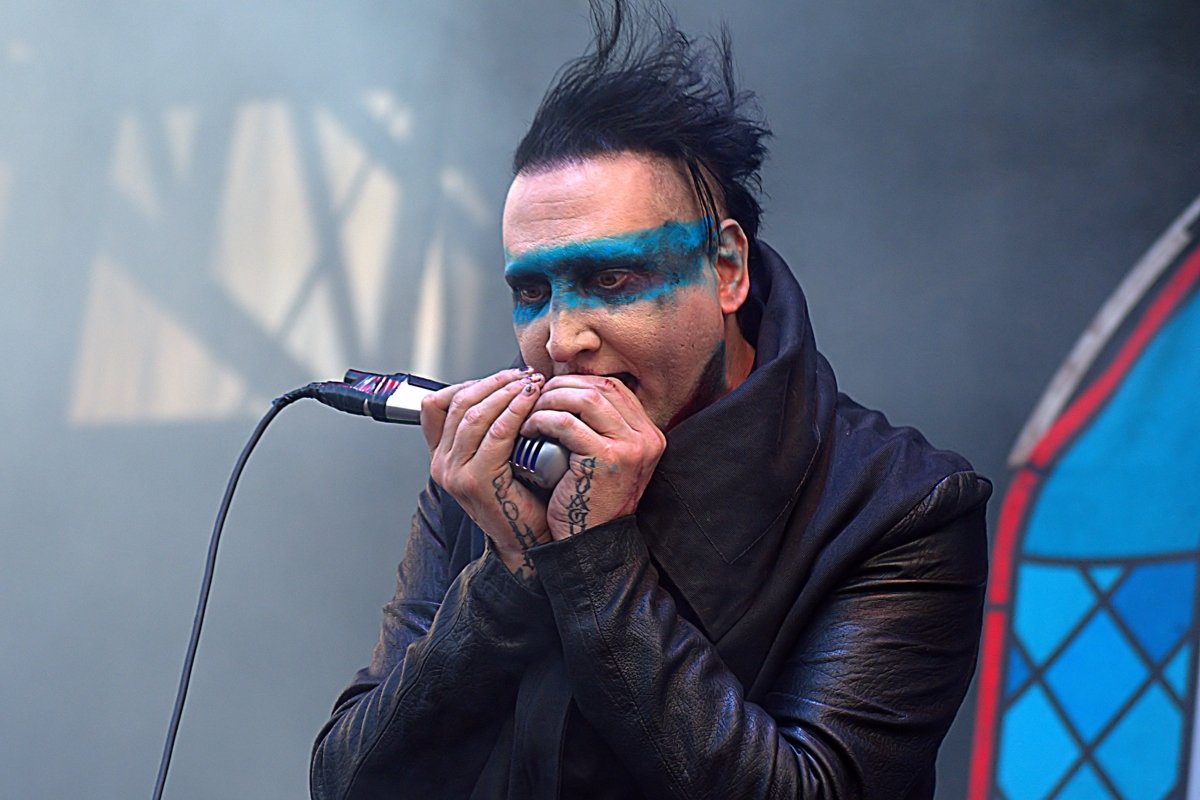 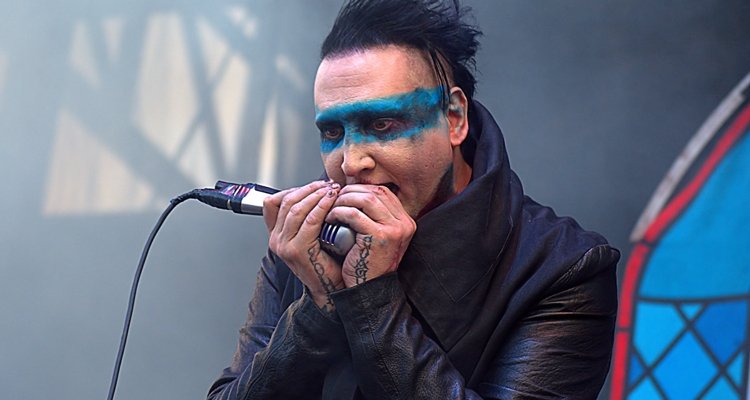 What did Marilyn Manson do? Multiple women have accused the rocker of sexual abuse. Here’s a timeline of how those accusations have developed over 2021.

Rumors swirled about a high-profile individual in the music industry being a predator on the level of Harvey Weinstein for several years. Actress Evan Rachel Wood was the first to publicly say what she experienced at the hands of Brian Warner in February 2021. But that was not the first time Wood spoke about the abuse she suffered.

What Did Marilyn Manson Do? – A Timeline

Evan Rachel Wood is a former fiancée of Marilyn Manson. The actress dated the musician from 2006 to 2010. But a spotlight on the abuse she suffered came into focus in February 2018.

June 2009 – Marilyn Manson says some disturbing things about Wood following a break-up in 2007. He said his song, “I Want to Kill You Like They Do in the Movies,” is about the ‘fantasies’ he had about “smashing her skull in with a sledgehammer.” Billboard reports that Manson hung up the phone when asked about this interview following the allegations in November 2020.

February 2018 – Evan Rachel Wood and other activists testify before Congress during a House Judiciary Subcommittee hearing. Wood described horrific experiences of sexual assault and torture she suffered from a man “who claimed to love her.” Wood did not name her abuser at the time.

Actress Charlyne Yi spoke up on February 17 in a now-deleted tweet. Loudwire preserved what the actress wrote. “Ugh, don’t even get me started on Marilyn Manson. Yes this happened a long time ago – on the last season of House, he came on set to visit because he was a huge fan of the show, and he harassed just about every woman asking us if we were going to scissor, rhino & called me a China man.”

April 2019 – Evan Rachel Wood testifies again in front of the California Senate Safety Committee. She testified to help pass the Phoenix Act, giving domestic abuse survivors more time to press charges against their abusers. Wood once again testifies to the horrific abuse and torture she experienced in a relationship with a man. Once again, Wood does not share the identity of her abuser.

“The name of my abuser is Brian Warner, also known to the world as Marilyn Manson,” the post begins.” He started grooming me when I was a teenager and horrifically abused me for years. I was brainwashed and manipulated into submission and I am done living in fear of retaliation, slander, or blackmail.”

“I am here to expose this dangerous man and call out the many industries that have enabled him, before he ruins any more lives and I stand with the many victims who will no longer be silent.” Following this post, four other women made sexual assault allegations against Marilyn Manson.

February 2021 – Marilyn Manson took to Instagram to deny the claims, calling them “horrible distortions of reality.”

“My intimate relationships have always been entirely consensual with like-minded partners. Regardless of how – and why – others are now choosing to misrepresent the past, that is the truth.”

“In light of today’s disturbing allegations by Evan Rachel Wood and other women naming Marilyn Manson as their abuser, Loma Vista will cease to further promote his current album, effective immediately,” the statement from the label reads. “Due to these concerning developments, we have also decided not to work with Marilyn Manson on any future projects.”

Manson also lost a guest star spot in the Starz series American Gods. The shock rocker had a recurring role in the TV series. AMC’s horror-focused Shudder also chose not to air a segment of Creepshow featuring Manson.

February 2021 – Ellie Rowsell and Phoebe Bridgers share their experiences with the rocker. Bridgers shared on Twitter: “I went to Marilyn Manson’s house when I was a teenager with some friends. I was a big fan. He referred to a room in his house as the rape room. I thought it was just his horrible frat-boy sense of humor, so I stopped being a fan and I stand with everyone who came forward.”

“I met Marilyn backstage at a festival a few years ago,” Ellie Rowsell tweeted. “After his compliments towards my band became more and more hyperbolic I became suspicious of his behavior. I was shocked to look down and see he was filming up my skirt with a GoPro. There were no repercussions for his behavior. A member of his tour staff says ‘he does this kind of thing all the time.’”

She alleges in her years-long relationship with Manson that he assaulted her and set rigid rules for her life that she was punished for not following. “I basically felt like a prisoner,” Bianco says. “I came and went at his pleasure. Who I spoke to was completely controlled by him. I called my family hiding in the closet.”

April 30, 2021 – Following the publication of her interview in New York magazine, Bianco sues Manson. She alleges that he raped her on or around May 2011, including “times when she was unconscious or otherwise unable to consent.” The suit also names Manson’s former manager, Tony Ciulla, as violating the Trafficking Victims Protection Reauthorization Act.

May 1, 2021 – Marilyn Manson publicly denies the claims in Esme Bianco’s lawsuit. An attorney for the rocker issued the following statement: “These claims are provably false. To be clear, this suit was only filed after my client refused to be shaken down by Ms. Bianco and her lawyer and give in to their outrageous financial demands based on conduct that simply never occurred.”

May 2021 – Another former girlfriend, Ashley Morgan Smithline, comes forward with abuse allegations. In an interview with People magazine, Smithline says she “survived a monster.” She claims Manson whipped her, cut her, and sexually assaulted her on multiple occasions.

May 28, 2021 – Another anonymous ex-girlfriend of Manson files a lawsuit alleging she was raped. The lawsuit alleges Jane Doe was subjected to “degrading acts of sexual exploitation, manipulation, and psychological abuse.”

June 6, 2021 – Ashley Morgan Smithline files a lawsuit against Manson for rape, unlawful imprisonment, and more. “Very early on, he made it clear that my life was definitely in danger and that he could kill me at any time,” she told The View. “I was afraid all the time that he would end my life.”

July 2021 – Marilyn Manson filed a motion to dismiss Esme Bianco’s lawsuit. The filing argues the statute of limitations for “untrue, meritless” claims are past. The lawsuit also calls them a “coordinated attack by multiple plaintiffs.”

October 8, 2021 – A U.S. District Court judge denied Manson’s lawyer’s request to dismiss the lawsuit. Manson was ordered to file a formal answer to each of the claims made within the suit within 14 days.

November 14, 2021 – A shocking report from Rolling Stone uncovers more allegations of abuse and false imprisonment. According to the report, Manson allegedly kept his victims in solitary confinement.

November 19, 2021 – A defense attorney for Marilyn Manson mentions the possibility of a blanket settlement for those who are suing the musician. “I don’t think that’s going to happen any time soon, but it’s in the cards,” lawyer Stephen D. Rothschild said.

November 29, 2021 – The Los Angeles County Sherriff’s Department executed a search warrant on a home belonging to Manson. The musician was not home at the time of the search.

December 6, 2021 – Evan Rachel Wood claims Manson threatened to f*ck her 8-year-old son. The allegation was made in a declaration filed in April as part of the actresses’ ongoing custody battle with her ex-husband. The documents state those threats forced her to hire more security, install bulletproof glass, and move from Los Angeles to Nashville.