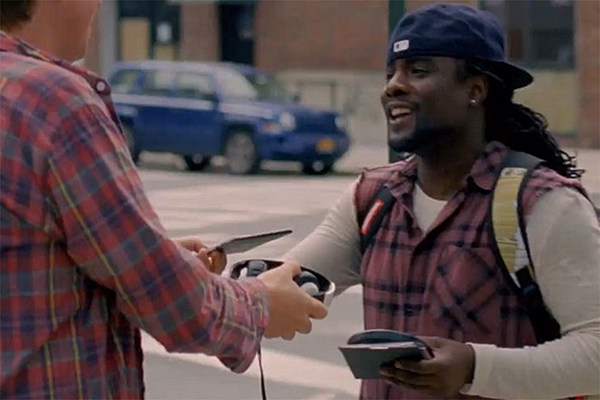 We've all been approached on the street by someone fering to let you hear their mixtape, only for them to turn around and ask you to buy the tape. Now, Wale tries his hand as a mixtape hustler with an appearance on the HBO show Crashing.

The rapper posted a clip his appearance on Instagram and gave a shoutout to the show's star, comedian Pete Holmes. "Shyt. We ain't even have cable growin up .. let alone HBO.. well tongiht things come full circle," Wale wrote. "Catch me on #crashinghbo at 10:30 . Shoutout @peteholmes n @juddapatow . Things are happenin."

In the clip from the episode, Wale pushes his mixtape on Holmes, then asks the comedian to buy it for $10. "That's you boy, $10," the rapper tells Holmes. "Yo, man, help me out. Man, I've been on the corner all day, all night. It's smokey as shit out here. Ain't no bitches out here, the police harassing a nigga, all that shit, man."

But when Holmes doesn't want to purchase the tape, Wale flips the script on him. "Oh! OK! Aight, OK. I see, I see what this is," Wale says. "Another White man taking advantage another brother, huh? It's always a racial thing in America. And your White guilt is showing all over the place."

While it appears Wale is trying his hand at the acting world, the rapper isn't done with music yet. Last week, Wale teased a new song with J. Cole. "Workin on new vibes with Cole," the rapper wrote over a video Cole in the studio.

Check out Wale's hilarious cameo in Crashing below.