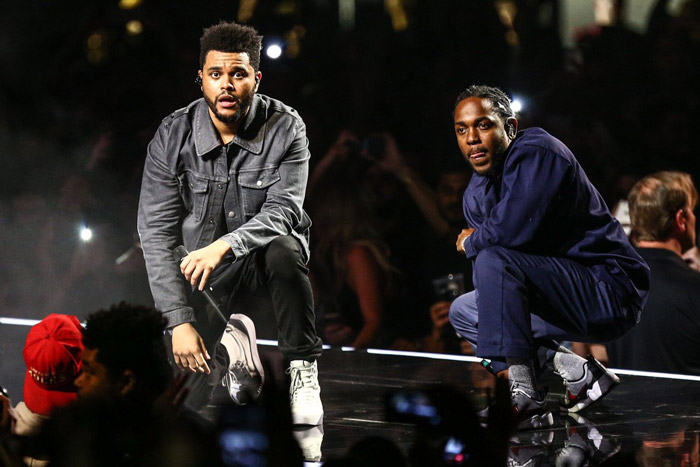 Kung Fu Kenny and the Starboy are back at it. After collaborating on “Sidewalks,” Kendrick Lamar and The Weeknd are reportedly reuniting for a special collaboration f the upcoming Black Panther soundtrack, which is being curated and produced by K-Dot, TDE, and label CEO Anthony “Top Dawg” Tiffith.

Citing an insider, Complex reports that the collaboration is imminent and that it has been teased by Abel’s recent post on Instagram, which features the Black Panther.

In the past, The Weeknd has heaped praise upon the Compton rapper. “He’s a genius,” he said. “I played him songs, the ‘Starboy’ theme, course, which he incorporated into his verse. He would just walk around, we had food, and he’s writing his verse in his head. He’d go to his phone, look at it a few, put it back in, start walking around. He then at one point went into the studio booth, closed the door, and I could hear him yelling his verse.”

The collaboration is an extension K-Dot and Abel’s bond, which included several joint concert appearances last year, but it also continues the XO boss’s collaboration with Marvel. The first installment their “Starboy” comic is coming soon.

So far, TDE has rolled out “All the Stars” featuring labelmates Kendrick and SZA, and “King’s Dead,” a Jay Rock collaboration with Cortez Kenny and Future.

Black Panther: The Album is slated to arrive Feb. 9, while the movie hits theaters Feb. 16.