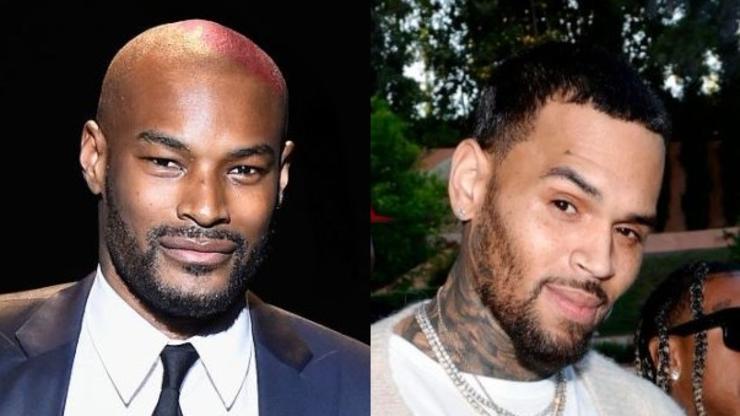 The model revisited the drama that erupted after Brown issued threats after seeing Beckford and Karrueche in a picture together.

Back in 2015, an unlikely beef was launched between Chris Brown and Tyson Beckford. It was Memorial Day Weekend and photos of celebrities enjoying the holiday surfaced online, including a snapshot of Beckford posing with Brown’s ex, Karrueche Tran. The pair had only split months before, and when the singer saw the image, he took to social media to shoot off a series of threats.

“Keep playing I’ma f— ya baby momma and then whoop you child like he mine,” Brown reportedly tweeted at the time. “U wanna keep walking them runways. I need ta legs for that. Keep playing like a ain’t wit the bullsh*t.”

Beckford revisited that spat during his recent sit-down with VladTV. “The funny thing is, [50 Cent] had taken the same picture,” said the model. “I think a lot of these dudes think, ‘Okay, this guy’s an ex-underwear model, he’s, you know. For some reason, they think I’m p*ssy or soft. You can ask anybody out there. I am not that.”

“Mr. Man thought he was gon’ scare me and I straight up took all the treats,” Beckford continued. “Then the district attorney of Los Angeles got involved and the district attorney of Las Vegas as well because this is an open threat. And the state that I’m from is Florida, so this is taken as a stand your ground and also Las Vegas is a stand your ground. So, at the time, a lot of people don’t know it but you’re gonna know now, I fly with my firearms.”

Beckford claimed that he told Brown if it was a real problem, “meet me somewhere in the desert ’cause I ain’t running from nobody.” The supermodel added that he also told the singer that he could bring whoever he wanted. Instead, Brown reportedly apologized.

“But I had to deal with little members of his crew who thought they were gangster and I’m like, ‘Ain’t y’all bunch of dancers?’ Like, did y’all get a bad batch of cocaine or what?” Beckford said that wasn’t the end of his interactions with Brown. There was an alleged club incident in New York when the singer was reportedly out front in a sprinter van, but Beckford claimed that “security was holding me back.”

When he was finally able to make it to the van, Beckford says that the New York Police Department’s “Hip Hop police” stopped him and he was surrounded by the authorities as the sprinter drove off. Check out Tyson Beckford sharing his side of the story below.