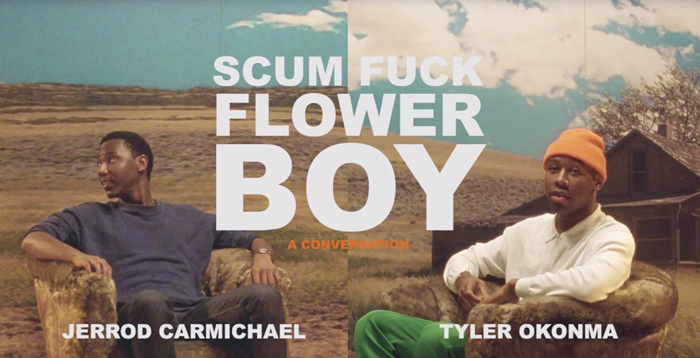 Tyler, the Creator opens up about his latest album, Flower Boy, during an in-depth conversation with comedian Jerrod Carmichael.

The hour-long video, titled “FLOWER BOY: a conversation,” features a split-screen view at the dialogue, exploring the making Tyler’s Grammy-nominated LP. “A lot the songs] was just asking questions,” he explains in the visual, which he directed. “How am I feeling today? That’s how a lot songs happened, answering these questions.”

According to the Odd Future MC, the album was inspired by pop music, including works by Max Martin, Pharrell Williams, and Justin Timberlake. The project was also crafted out songs that weren’t taken by other artists.

“A lot these songs on this album were songs people didn’t take,” he said. “I think that because it came out and it works, I can now be like, ‘Hey, pop artist. I just want to produce. I can write a cool little melody. Let’s do it.’ No one’s called yet but that’s all I wanna do.”

Taking to Twitter, Tyler explained why he opted to release this conversation online himself. “im not into the idea interviews anymore cause theyre ugly and…..i rather do it myself ya know.”

Carmichael is no stranger to hip-hop. Last year, he starred in the video for JAY-Z’s “Moonlight.”

Last week, The Creator released the latest edition his Golf Le Fleur sneaker with Converse. Now, he is gearing up for a North American tour with Vince Staples, which is set to run from Jan. 26 in Vancouver through March 4 in Milwaukee.