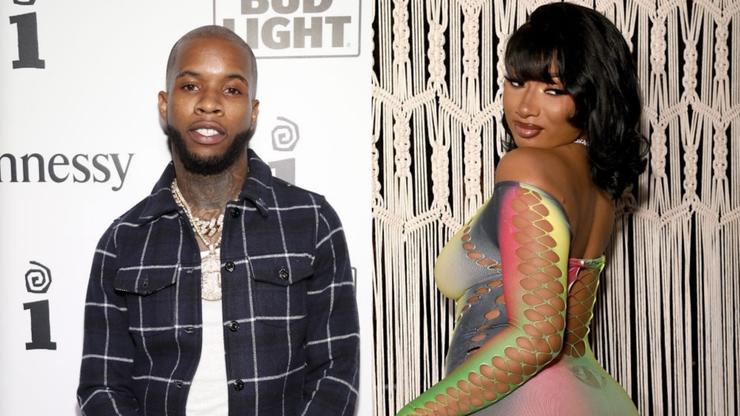 Alleged audio of the altercation has surfaced online disputing Lanez’s claims that he wasn’t involved in the bloody incident.

It was only a matter of time before Megan Thee Stallion‘s name was dragged into the ongoing online debate about the alleged feud between Tory Lanez and August Alsina. If you haven’t heard, the Toronto-born artist has vehemently denied rumours that he and the latter got into a physical fight, even despite the countless receipts that have surfaced online to dispute his innocence.

While speaking with Akademiks, the PLAYBOY hitmaker told the podcast host that “nothing happened” between him and Alsina, claiming that he had no idea if his fellow R&B vocalist was making the story up for promotion or something else, but insisting that he wasn’t involved.

In the hours since, video and audio from the altercation have surfaced online, making things look worse for Lanez, who was also been dropped from an upcoming tour after comedian Rip Michaels confirmed Alsina’s claims about a fight taking place.

Twitter users have been having a field day reacting to the news, many of them pointing out that if the Canadian is caught lying about this situation, it won’t look good in his upcoming trial against Thee Stallion for allegedly shooting her in July of 2020.

“We’re literally witnessing how this [leperchaun] gets on the internet and lies and gaslights his victims,” one person wrote. “Tory publicly stated he had nothing to do with beating up August Alsina and we can clearly see his lying ass caught in 4K. He did the same with Megan! F*CK HIM.”

Others added, “Y’all see how easily Tory lied and said he wasn’t there and wasn’t involved with August? And y’all expect me to believe he didn’t shoot Megan?” and “The fact that it took a man for y’all to actually believe that Tory Lanez did that to Megan… Y’all tiring.”

Check out more responses to the latest receipts below, and tap back in with HNHH later for more pop culture news updates.