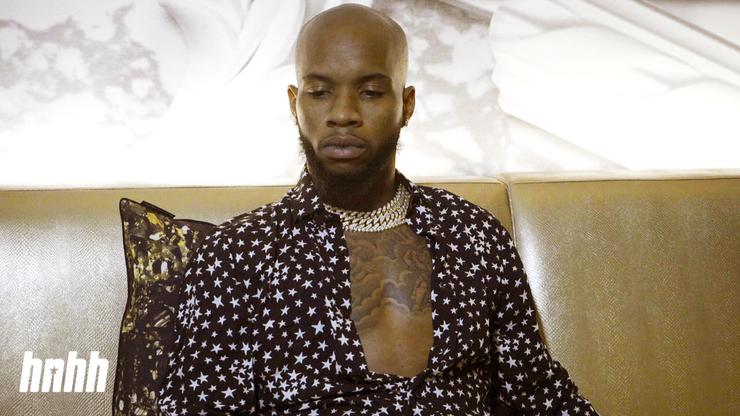 Tory Lanez explains his previous tweet, which was extremely similar to some Megan Thee Stallion lyrics.

People are convinced that Tory Lanez is obsessed with Megan Thee Stallion, the woman he’s accused of shooting last summer. On Thursday morning, the controversial Toronto-based rapper sent out a tweet, which was eerily similar to some of Megan’s lyrics from “Girls In The Hood”.

“Sometimes u gotta just stand outside … to remind yourself your ‘Outstanding’,” wrote Tory, which fans instantly took note of, drawing similarities to Hot Girl Meg’s bars. “I don’t stand outside ’cause I’m too outstandin’,” she raps on “Girls In The Hood“. Well, the post has since been deleted and it didn’t take long for Tory to try and control the narrative, claiming that he’s actually quoting some random girl’s yearbook quote.

“She was on to something,” wrote the rapper on Instagram Stories, posting a picture of a teenager’s yearbook quote that reads, “I’m gonna stand outside, if anyone asks, I’m outstanding.”

This brings up even more questions. Firstly, whose yearbook is this, and does Tory know the girl he’s shouting out? Or is he just doing some damage control after people were quick to realize it was some Megan lyrics?

This week, the dramatic unfolding of Tory and Megan’s relationship continued after the former announced his upcoming single with DaBaby, one of Megan’s frequent collaborators. The Houston Hottie responded to the bait by telling Tory “nice try” and claiming that Baby’s verse on the song is “old and not cleared”.

Do you wish this drama would have stayed in 2020?