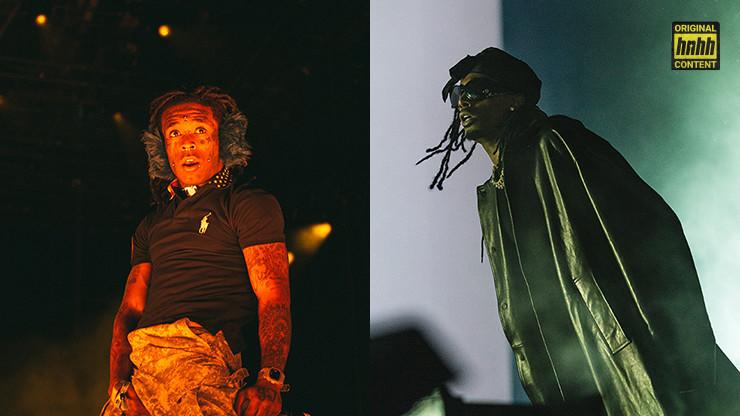 Rolling Loud NYC was a movie, and it didn’t come without a bunch of surprises.

Thousands of rap fans were back outside this weekend, trekking to Queens, New York to catch the world’s largest hip-hop festival, Rolling Loud, for the second-ever iteration at Citi Field. With a rain-or-shine policy in place, festivalgoers danced in the rain during J. Cole and Playboi Carti‘s performances, held onto their hats as they watched Kodak Black put on a show in hurricane-like winds, and ran from stage to stage to catch dozens of their other favorite rappers doing what they do best. As always, though, the three-day event came with its fair share of surprises.

Nothing ever goes 100% according to plan at Rolling Loud. Whether we’re discussing the previous shows in Miami, Los Angeles, or New York, there have always been some issues that arise along the way. A few artists may end up missing their flights, resulting in set times being moved around. In previous years, we’ve also seen the festival become somewhat of a hotspot for the hip-hop police, who previously banned Pop Smoke, Casanova, 22Gz, Don Q, and Sheff G from the first-annual Rolling Loud in NYC, with the cops explaining that those five rappers “have been affiliated with acts of violence citywide. The New York Police Department believes if these individuals are allowed to perform, there will be a higher risk of violence.”

As the show returned to Citi Field, artists like 22Gz were able to get on stage without any problems, but that didn’t mean that others weren’t subjected to the police madness, as we’ve all likely read by now about Fetty Wap’s arrest upon his arrival to the stadium.

Alongside our list of the ten best sets at the festival this weekend (which you can check out here), we’ve put together a list of the biggest surprises from this past weekend below.

When the official line-up was announced a few months ago for Rolling Loud NYC 2021, some fans thought that it looked a little too good to be true. Unfortunately, that was indeed the case as many artists never actually showed up to their announced sets this weekend. Artists including Lil Baby, Megan Thee Stallion, BIA, and others were mysteriously left off of the set times before failing to appear altogether. Some rappers, like Florida’s SpotemGottem, arrived too late to perform, despite being on the festival grounds and doing press. On the day of his performance, festival organizers announced that Morray would no longer be showing up. Lil Durk was supposed to headline the Audiomack stage on Thursday night, but he never appeared either, prompting angry fans to throw water bottles at the stage. And finally, Chicago’s Chief Keef managed to do the unthinkable… he showed up late two days in a row, upsetting his fans who bought tickets just to see him and never actually performing. He was initially expected to close out the Punx stage on Friday night, but he didn’t show up. Then, he was announced for a headlining set on Saturday night on the Audiomack stage, but he was tardy again.

At this point, it may be wise to expect the unexpected with Rolling Loud moving forward. And when you’re buying tickets, you should likely consider that some of the artists on the line-up won’t be showing up.

Following the release of his new album The Butterfly Effect, fans were excited to see Fetty Wap get back to the main stage with his performance at Rolling Loud, but he ended up being one of the aforementioned no-shows on Thursday afternoon. As the crowd got ready to sing all the words to his hits, including “Trap Queen,” “679,” and “My Way,” Fetty’s set time came and went with no announcement from the festival organizers about whether he would be showing up or not.

Hours later, it was reported that the New Jersey-based rapper was arrested by the FBI upon his arrival at Citi Field. Alongside five other people on his team, Fetty was allegedly charged for using firearms in connection with drug trafficking. He has been accused of transporting, distributing, and selling over 100 kilograms of hard drugs, including heroin and fentanyl. If he’s convicted of his alleged crimes, he faces life in prison.

His arrest was a sour note for the festival to start off on, with fans making yet another connection between the festival and its heavy police presence, with some even going so far as to suggest that Rolling Loud is a front for the cops to lock down on criminalistic rappers. While that much is pretty absurd to imply, it makes sense that fans would be frustrated over how many arrests have happened over the years at RL. If you recall, Kodak Black was arrested at Rolling Loud Miami in 2019. When the festival returned to Florida in 2021, Fredo Bang was arrested. So was EST Gee. The festival has unfortunately served as a backdrop for many rappers’ arrests over the years, and that’s a trend that we seriously hope ends with the next iteration in California, this December.

Comparatively to Governor’s Ball, which took place a few weeks ago at the same stadium, fans remarked that there was a much higher police presence at Rolling Loud NYC this weekend. Without exaggeration, it was impossible to walk several feet without spotting an NYPD officer walking inside or out of the festival, and once you were inside, people noted that plainclothes cops were also all over the place.

With this being a hip-hop festival, there is obviously a racial aspect that comes into play here. A Rolling Stone article published after Fetty Wap’s arrest suggests that, in a few years, it wouldn’t be surprising to hear that Rolling Loud was actually in cahoots with the feds all along. After all, as previously mentioned, Fetty Wap hasn’t been the only high-profile arrest at RL over the years.

For glaring reasons, there needs to be an abundance of security at any music festival. However, it seemed a little excessive (and uncomfortable) to pass likely over a hundred officers before even stepping foot into Citi Field.

Headlining on Thursday night, 50 Cent’s set on the Deleón Stage was filled with surprises. Performing a medley of his classic records, Fiddy’s performance was highlighted by all of the guests he brought out to the crowd’s roaring approval. First, he introduced A Boogie wit da Hoodie. Then, he brought out A$AP Rocky. The two New York rappers were welcomed with open arms by the crowd of thousands. Finally, before closing out his set, 50 brought DaBaby on stage.

Previously, DaBaby made headlines with his disgusting, homophobic comments from Rolling Loud Miami earlier this year. As he tried to hype the crowd up, the North Carolina native made disheartening comments against the LGBTQ+ community, which hurt his career for months. DaBaby still hasn’t gotten completely back on his feet after the controversy, but he got one step closer during 50’s set. Performing “Masterpiece” and “Rockstar,” Baby’s presence was a total shock to many of the fans in attendance, especially after everything that went down at the last RL. Thousands of music lovers and festivals distanced themselves from the rapper after his comments, but Rolling Loud wasn’t one of them. He may not have been officially booked for his own set in New York, but he made a definite impact with his appearance on Thursday night.

For many, the best moment of the entire weekend came during Playboi Carti’s set on Friday night, which went on during a nasty storm. With fans racing between the Deleón stage to catch J. Cole’s performance and the Audiomack stage for Playboi Carti, those who stayed put at the Atlanta rapper’s show were met with a major surprise when his DJ started playing “Shoota.”

The music blared and, shockingly, Lil Uzi Vert ran out onto the stage to perform the track with his former friend. The two have been at odds for years, feuding on social media and promising to steal each other’s thunder every time the other drops new music. They even got into a fistfight at one point during their tumultuous friendship, according to Uzi. As they hugged it out on stage following the surprise, fans couldn’t help but get teary-eyed over such a wholesome moment.

Much like with XXXTentacion and Ski Mask the Slump God at Rolling Loud Miami 2018, Rolling Loud always manages to put together the best reunions between rappers that were once at each other’s throats, but have put aside their differences to reconcile in front of thousands of onlookers.

Did we miss any major surprises from Rolling Loud NYC 2021? Let us know in the comments, and be sure to check out our recap of the festival here.