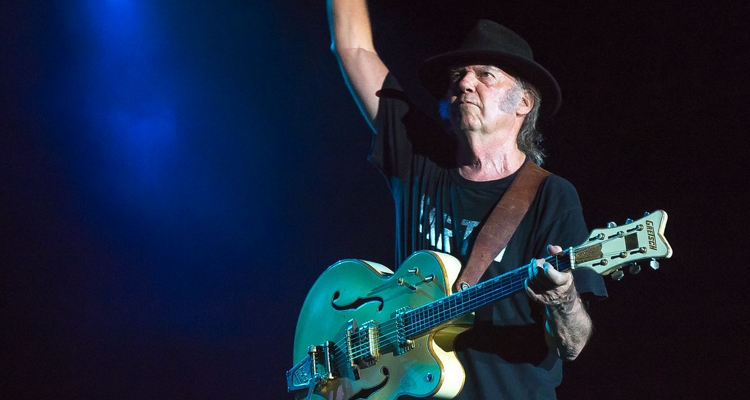 Yesterday, Spotify removed the catalog of Neil Young after the 76-year-old singer-songwriter told the platform that it would have to choose between hosting his music and The Joe Rogan Experience. Now, SiriusXM is touting the return of its Neil Young Radio channel.

Neil Young issued the much-publicized ultimatum in an open letter earlier this week, emphasizing his opposition to comments that comedian Joe Rogan made about COVID-19 vaccines during episodes of his Spotify-exclusive podcast.

“I want you to let Spotify know immediately TODAY that I want all my music off their platform,” Young wrote in the since-deleted message. “They can have Rogan or Young. Not both.”

And yesterday, Spotify confirmed that it had sided with Rogan – who signed a reportedly $100 million contract with the platform back in May of 2020 – and would remove the music of Toronto-born Neil Young. (Of course, the JRE agreement is one of several multimillion-dollar plays Spotify’s made in the podcasting arena.)

“We want all the world’s music and audio content to be available to Spotify users. With that comes great responsibility in balancing both safety for listeners and freedom for creators,” a Spotify spokesperson said in a widely circulated statement. “We regret Neil’s decision to remove his music from Spotify, but hope to welcome him back soon.”

At the time of this piece’s writing, Young’s 41 studio albums weren’t available to stream on Spotify – though users could still access a few singles, demos, and live recordings from the Rock and Roll Hall of Fame inductee. And despite some calls on social media for artists to join Neil Young in pulling their work from Spotify, there doesn’t seem to have been a material reaction from the broader music community.

But SiriusXM has promptly moved to attract fans who are disappointed with Young’s Spotify absence, indicating in a formal release this morning that its Neil Young Radio channel will feature the singer-songwriter’s “complete catalog, from his solo albums to his work with Crosby, Stills, Nash & Young to Buffalo Springfield and Crazy Horse, to his latest album.”

The satellite and streaming station originally launched last month as a “limited-run channel” and features “exclusive stories from Neil Young.” Neil Young Radio has returned to SiriusXM channel 27, where it will remain for seven days beginning today, and the SiriusXM app, where it will stream for a month, higher-ups said.

“When you have an opportunity to present an iconic artist still at the height of his creativity, you don’t hesitate to do it, again,” said Blatter. “Outspoken, brave, and a true music icon, Neil Young is in a rare class of artists, and we are honored to collaborate with him to create a special audio experience for his fans.”

SiriusXM stock (NASDAQ: SIRI) is currently up more than three percent from yesterday’s close, for a per-share price of $6.16. Spotify stock (NYSE: SPOT), meanwhile, is down about 1.2 percent, at $172.95 per share.