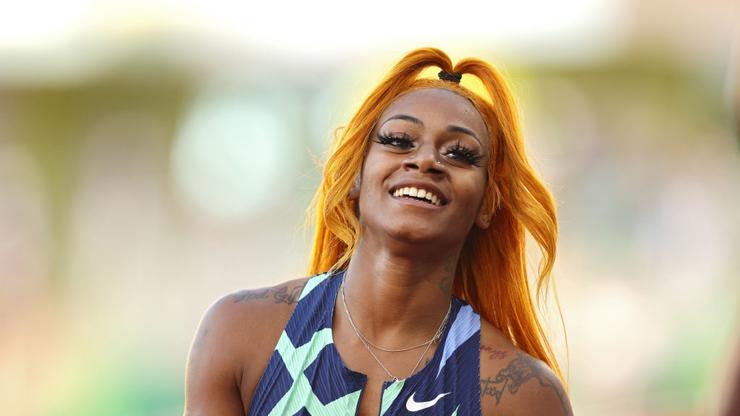 And just like that, Sha’Carri Richardson is back like she never left. After a tumultuous few years adjusting to life in the public eye, the 22-year old track and field sprinter is reclaiming her way back to the number one spot. On Tuesday (August 30), Sha’Carri defeated Olympic champion Elaine Thompson in her first race since the USA Track and Field Outdoor Championships more than two months ago.

Sha’Carri Richardson runs and celebrates in the Women’s 100 Meter semifinal on day 2 of the 2020 U.S. Olympic Track & Field Team Trials at Hayward Field on June 19, 2021 in Eugene, Oregon. (Photo by Patrick Smith/Getty Images)

The Dallas, Texas native won in 11.29 seconds, one-hundredth of a second ahead of Thompson (11.30) on what was reportedly wet track with strong head wind in Switzerland. Many fans took to social media to congratulate the young athlete on her win with comments like, “Told y’all she was gonna get better,” and “Don’t be so quick to write people off. Congratulations.” While many people showed love, Sha’Carri took to Twitter with a mess for her haters, tweeting, “Y’all hate me win or lose (laughing emojis).”

Sha’Carri’s big win comes just two months shy of the young sprinter not qualifying for the 200-meter final, losing her chances at at the USA Track and Field Outdoor Championships. Shortly after the disappointment, Sha’Carri made a statement about the need for reporters and media to be more respectful to athletes.

“I’m coming to speak, not just on my behalf but on all athletes’ behalves, that when you guys do interviews, y’all should respect athletes more,” Richardson said. “Y’all should understand whether they’re coming from winning, whether they’re losing, whatever the case may be. Athletes deserve way more respect than when y’all just come and throw cameras into their faces.”

Check out Sha’Carri’s win below.