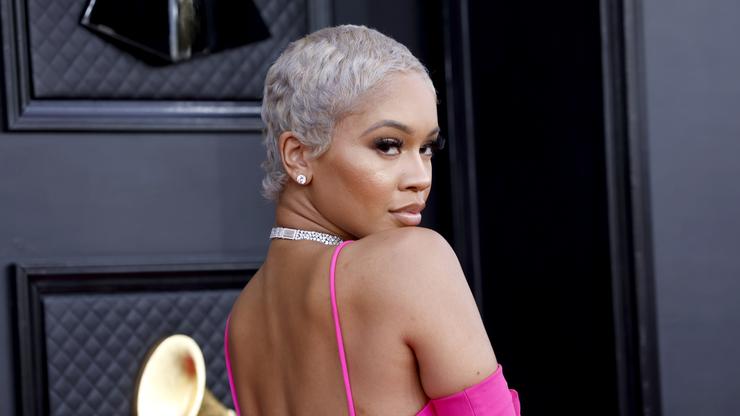 Saweetie has been laying low for a minute now, but all it took was one Instagram post for her to shake some things up.

The “My Type” rapper posted a photo dump of her wearing a colorful outfit onto IG. She sported a dark pink, satin spaghetti strap top with green, burgundy, blue, and pink sweatpants. To accessorize, she had on a purple cap, held a blue clutch, and wore blue furry, clog heels. To top it all off, the Icy Girl had to add on some diamonds around her neck and wrist.

Despite the fit of choice, it wasn’t her style that caught everyone’s attention– it was her caption. Saweetie, whose real name is Diamonté Quiava Valentin Harper, wrote, “i miss my old boo but I ain’t gone tell him.”

The first person to pop into everyone’s mind might have been her most recent partner, Quavo. The two rappers sparked dating rumors back in 2018 and confirmed their relationship shortly after in the same year. They quickly became a star couple, getting matching grills and gifting each other cars. However, the two called it quits last March after Saweetie revealed that she suffered too much betrayal while being with the Migos member.

Now, while Quavo might have been her last relationship, he isn’t the only celeb that Saweetie could be referring to.

According to Popsugar, the California native had a four-year relationship with actor Keith Powers. She claimed they dated between the ages of 18 and 22, but broke up because things were too toxic. Being that Powers just recently split from his girlfriend Ryan Destiny, Saweetie could be referring to him.

The 28-year-old entertainer was also in a relationship with Justin Combs. It is said that they began dating in 2016, but it was never revealed why they broke up.

Who do you think Saweetie is missing?