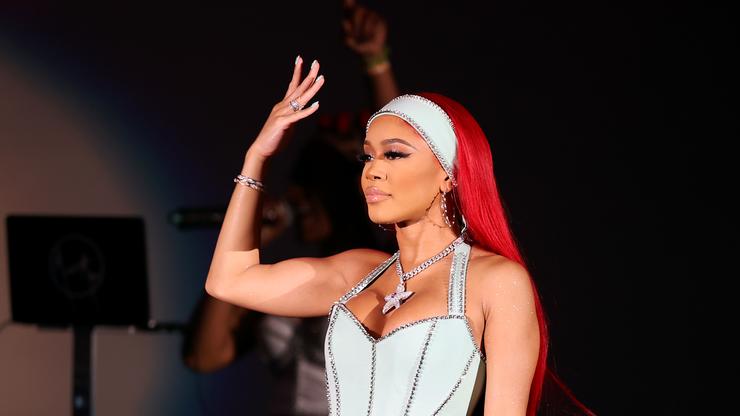 Everyone, pack it up because Saweetie won Halloween this year with the purr-fect costume.

The Queen of Collabs went above and beyond with her Catwoman cosplay, even getting Halle Berry, who starred in the 2004 film of the same name, to sign off on her costume. Berry made a cameo on an Instagram video where Saweetie proudly struts around in high-heeled boots and her shiny Catwoman costume on a rooftop.

Saweetie tributed the post to the actress, “Had to put on for the best Catwoman to ever do it @halleberry,” Saweetie captioned.

Berry reciprocated in kind, posting the same video with the caption, “There’s enough room for more than one Catwoman @saweetie #IKDR.”

The hilarious video begins with a voiceover from the actress, who can be heard saying “You see sometimes I’m good, but sometimes I’m bad… but only as bad as I wanna be.”

Berry climbs onto the rooftop and sees Saweetie donned in all black, shocked, “What the hell is going on here?”

The rapper coyly replies, “I’m just trying to get out here and get these coins.”

A few seconds of a tense staredown between the two later, the actress iconically replies in Saweetie’s signature catchphrase, “I know that’s right.”

Halle Berry recently went viral on Twitter when the latest trailer for The Batman sparked conversation about the best version of Catwoman. The actress had faced backlash when the 2004 film first premiered, but this time, fans rushed to her defense. “I remember Halle Berry catching so much flack for Catwoman growing up, then I watched it for myself and I was like?????????? Y’all did all that bashing for what,” one fan wrote.

The actress was appreciative of the praises and took to Twitter to thank fans, although they were almost two decades late.