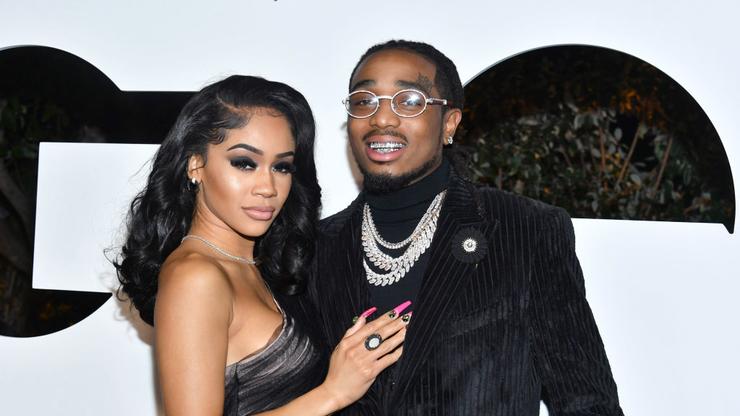 “I thought we was gon spend the rest of our lives together.”

Saweetie has been linked to some of the hottest men in the game. From Keith Powers, to Justin Combs and allegedly Lil Baby, the Icy Girl’s dating life has been a hot topic of conversation ever since she hit the scene. However, fans can’t seem to shake her two and half year relationship with Quavo. The Migo and the “Tap In” rapper parted ways last year over what she she considered to be a “betrayal.” No further details about the split were disclosed, but Saweetie did open up about the beloved partnership on the latest episode of Caresha Please.

The City Girl host grilled Saweetie about her former relationship with the “Hotel Lobby” rapper, asking, “Did Quavo ever cheat on you?” Without giving a direct answer, the “Best Friend” star made a face while responding, “I think the past is the past and I’ve moved on since then.” Yung Miami responded with a follow up question, asking Saweetie thought her relationship with Quavo was “toxic.” “I think we had a lot of growing pains together,” she responded.

As Yung Miami gushed over the Sex:Unzipped host’s memorable moments with the Migos star, Saweetie shared, “I thought we was gon spend the rest of our lives together.” She added, “With him, I knew it was the one. It was different.” Since parting ways in 2021, Saweetie has had her fair share of alleged relationship. Earlier this year, fans starting speculating that she was back with her ex, Keith Powers after spotting them at a mutual friend’s party. People also suspected that she dated Lil Baby after he reportedly took her on a shopping spree.

When asked why her relationship with Quavo ended Saweetie replied, “Just differences.” Check out the latest episode of Caresha Please and share your thoughts.