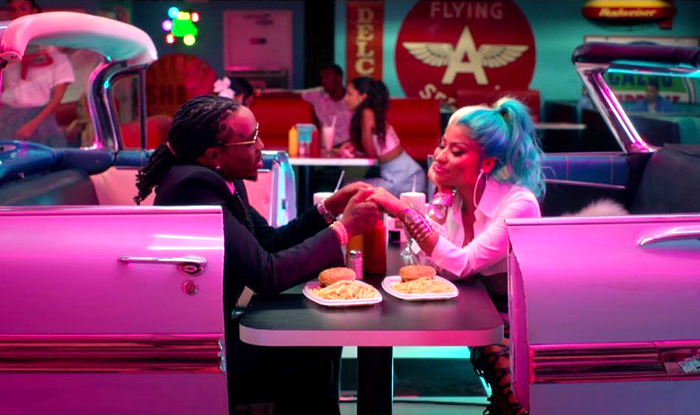 Quavo and Nicki Minaj play for keeps in the video for their Quality Control collaboration “She for Keeps,” which premiered as part the label’s Control the Streets, Vol. 1 compilation late last year.

Directed by DAPS and Quavo, the visual takes on a throwback vibe with references to the ’80s and ’90s like the original Nintendo Entertainment System, which landed in 1983, and The Source’s Ice Cube cover from 1991.

Huncho kicks things f in a neon outfit, complete with a lime green fanny pack and Reebok Pump sneakers, which originally dropped in 1989. Meanwhile, Barbie calls him up on a rotary phone before meeting up at an old school diner in a drop-top classic convertible.

It looks like Nicki and Quavo shot the visual back in August, based on their outfits, which were seen in video teasers back then. The song itself didn’t arrive until December, as part the aforementioned Control the Streets, Vol. 1.