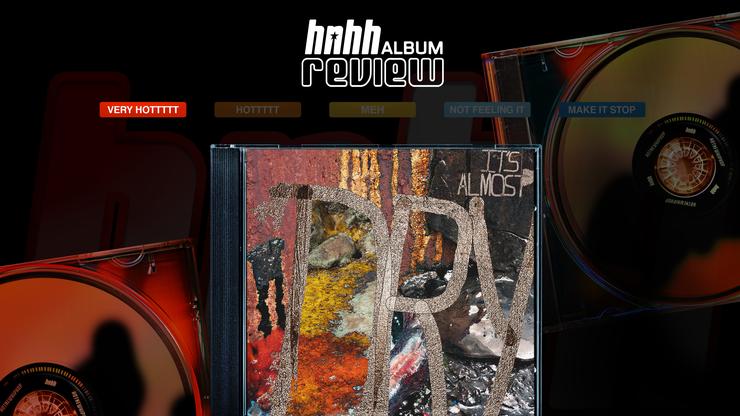 With Ye and Pharrell at the helm of production, Pusha T expands beyond his comfort zone without compromising his pen on “It’s Almost Dry.”

If you’ve wondered how fatherhood would impact Pusha T‘s coke raps, look no further than his new moniker – Cocaine’s Dr. Seuss. The Bronx-born rapper fielded questions online after the release of “Diet Coke.” Some wondered if the plug talk would remain as vivid, or at the very least, mature beyond the cocaine-riddled tales of Virginia Beach. “Welp this album is abt feeding the conscious mind, I hope you aren’t disappointed,” replied Push sarcastically to Spotify’s Head Of Urban Music, Carl Chery. “I’m growing up Carl.”

In some sense, it wasn’t necessarily a false assessment of Pusha T’s latest album, It’s Almost Dry. Daytona celebrated Pusha T’s legacy, an artist whose time and effort in hip-hop extended from the Neptunes’ heyday to the G.O.O.D Music reign of the 2010s. The latest from Push continues to shed the youthfulness of streetwear for a more refined and tailored approach to the game.

It’s Almost Dry is a 12-song body of work split into six songs produced by Kanye West and six songs produced by Pharrell Williams – two producers who’ve played pivotal roles in shaping the Pusha T sound in the past two decades. P’s production on Clipse records early work largely consisted of funk-driven compositions. However, their sophomore album Hell Hath No Fury leaned even closer to the murky soundscapes that helped in the evolution of Pusha T’s sound as a solo entity, at least in comparison to the funk-driven sounds on Lord Willin’. But in the years since the Clipse released their sophomore, Pharrell became an anchor to Despicable Me’s infectious soundtrack and the upbeat, family-friendly sounds have, in many ways, seeped into his work amongst hip-hop’s elite. On It’s Almost Dry, he delves into Pusha T’s lucid recountings of the coke trade through the darkest alleys of Virginia Beach where the legacy of the Clipse was formed. Pharrell pinpoints aspects of Push’s villainous character traits to animate, like the maniacal cackles scattered across the album.

With both Kanye West and Pharrell at the helm of production, Pusha T becomes a tool for Pharrell and Ye’s larger vision. Where Ye seems to be trying to bring back the nitty-gritty essence of mixtape rap, Pharrell’s intention seems more character-based, as he helped develop Pusha T’s persona on wax, with the rapper contributing cadences and vocal gymnastics. Take “Neck & Wrist” ft Jay-Z, for example. Pusha T’s voice oozes and carries the lightness of Slick Rick’s delivery. It’s not a song that is as lyrically potent as “Drug Dealer Anonymous” where the two are simply swapping bars with a point to prove. Pharrell’s direction allows Push and Hov to create a grandiose record that’s far more poised to hear on club speakers, even if the entire project sounds like it’s meant to slap out of a Nissan Altima. It’s not something you’d expect from three artists above the age of 40 but Pharrell’s touch transcends time.

Kanye, on the other hand, brings out some of Push’s best bars on the project. “Just So You Remember” is a vicious reminder of Push’s penmanship, and one of the best displays of his sheer lyrical aptitude. The slow-burning flow trickles through the hollow production, sampling Colonel Bagshot’s 1971 “Six Day War.” It serves a similar purpose as “Infrared” did on Daytona – no hook, just bars – to prove that Pusha T finds comfort as an antagonist in hip-hop. “Tennis chains to hide all my blemishes/ The Joker smile, you know who the villain is,” he raps through his teeth. It’s these moments, where he’s placed in the grimmest soundscapes, that he basks in the shadows as hip-hop’s anti-hero.

There’s harmony within the split production of Ye and Pharrell and there’s no better showcase of that than on “Rock N Roll.” Serving as the final collab we’ll likely hear from Kanye West and Kid Cudi, it’s the apex of the project where Pharrell and Ye split production duties. Ye’s penchant for pitch-up samples, in the form of Beyonce’s “1+1”, meets the clarity of Pharrell’s drums as Cudi’s grungy hums take their course to tie the song together. Meanwhile, Pusha T soaks in the present moment of his success, reflecting on the decrepit reality of the coke trade to “legally selling dope on all of these stages.”

Throughout the project, Pusha T revitalizes his brand of coke raps through subtle references to the greats. Much of it is done through the influences of the legends that paved the way. The cadences of Biggie Smalls crackle through songs like “Rambleton” where he addresses Anthony “Geezy” Gonzalez’s VladTV interview. Even the numerous references to the Roc-A-Fella era speaks directly to the infamous conversation that Charlamagne Tha God had with Coi Leray during her Breakfast Club interview. While Coi attempted to downplay Push’s achievements in rap over the course of 20+ years (she’ll be fortunate to last a fraction of the time), Charlamagne explained that Push came from a different era – a product of the 80s and the aftermath of the crack epidemic. Push isn’t necessarily striving to become a TikTok sensation but the moments where he does intersect paths with this generation’s hitmakers prove fruitful. On “Scrape It Off” ft. Lil Uzi Vert and Don Toliver, Push remains knee-deep in cocaine-fueled bars with humorous threats and references to communications with his plug through thumbs-up and flexes emojis. In all honesty, the song sounds like it could’ve landed in the next Fast & The Furious soundtrack, but even so, the level of execution is still infinite times better than anything that could be thrown into a multi-million dollar budget Hollywood flick.

In the ways that Pusha T hones into the ruthlessness of a figure like Tony Montana, he insists that he’s far more of Alejandro Sosa. This parallels his longevity in hip-hop, one that’s afforded him Architectural Digest-worthy homes and bourgeoisie taste levels that has him scoffing at uncultured swine with hilarity. “MGM gamblin’/ Blew a small mansion/ Annoyed ’cause this bitch callin’ Lanvin ‘Lan-ven,’” he raps on “Dreamin’ Of The Past.”

“Pray For Me” provides a promising update on the possibilities of the anticipated Clipse reunion. Malice reverts back to the glory days, finally dropping the “No” from his name and delivering a verse of the year contender where he declares that he “belongs on Rushmore just from chiselin’ a brick.” The marriage of Labrinth’s soulful vocals and Ye’s gospel-driven production find a perfect middle ground between holy and sacrilegious for Malice and Pusha T to rekindle their artistic chemistry. It’s a strong closer that aligns Pusha T and Malice’s mode of operation after the latter’s spiritual awakening.

By the time Pusha T’s next album rolls around, the complaints surrounding his focus on cocaine might be further exasperated than they were when It’s Almost Dry dropped. These complaints are redundant. Trends are bound to change, and whatever is considered cool at the time will retrospectively be regarded as a fad. Pusha T might understand this from his early years of pushing streetwear trends that, these days, he’s swapped out for tailored Kim Jones Dior suits. Cocaine is timeless, among users and peddlers alike. The dope game is like any other business that follows the supply-and-demand economic model. Pusha T applies this same principle to his craft, so why switch the formula?