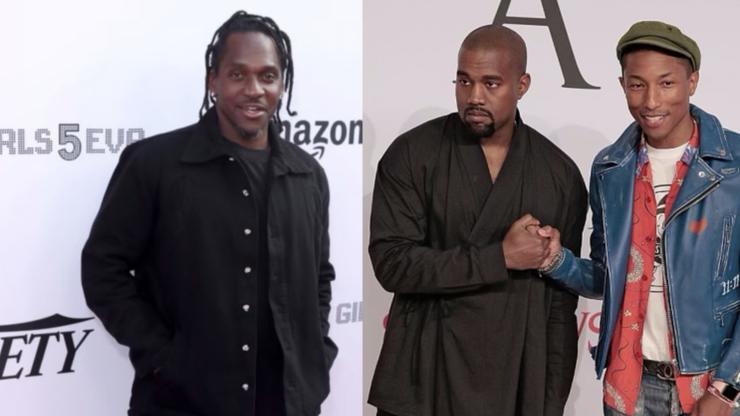 Pusha T has been doing plenty of press following the arrival of “It’s Almost Dry” yesterday.

Pusha T’s It’s Almost Dry has hardly been out longer than 24 hours, but fans of the 44-year-old rapper have had the 12-track project in constant rotation since its arrival, hyping up titles like “Brambleton,” “Rock N Roll” featuring Kanye West and Kid Cudi, and “Just So You Remember,” just to name a few.

As is tradition with the release of a new body of work, the New Yorker has been busy doing press interviews all weekend long. On Friday night, he appeared on The Tonight Show Starring Jimmy Fallon where he not only performed one of his new songs, but also opened up about some of his closest friends in the music industry.

When the host asked Push – born Terrence LeVarr Thornton – how he came up with his rap alias, the Daytona artist revealed that it was actually Pharrell Williams who crafted the moniker.

“We used to be in the studio a lot, and I would never stay in the studio and work with him. I would always leave out of the studio and run around and do things in the street and so on and so forth, and then I’d come back, and he’d be like ‘Damn, Pusha! Damn! Why don’t you just, you know, just chill with me, man? Put everything into the music.'”

Before he became known as Pusha T, the New York-born spitter was known as Terrar, “because [he] was born on Friday the 13th,” and his mother used to call him “Terrence the Terror.”

The conversation then shifted to the recording artist’s new baby, prompting him to reveal that fatherhood has made him feel “a lot more focused as an artist” because his time feels more precious.

Next, the two stars discussed It’s Almost Dry, with Pusha telling the backstory of the album’s name before going on to discuss the difference between Kanye West and Pharrell Williams as producers, seeing as they’re the masterminds behind the album.

“It’s 12 songs, six by Ye, six by Pharrell,” he began. “Ye is just a Pusha T rap fanatic. He just wants me to rap all day long, and then he just wants to take them from me and edit them and do what he wants to do with it, right?”

Pharrell, on the other hand, “is like more of a composer,” according to Push. “He wants to make sure that every verse, every hook, every cadence, every flow, everything – he likes to call them ‘sticky moments’ – and just stays with you the whole time, throughout the whole song.”

Elsewhere on last night’s episode of The Tonight Show Starring Jimmy Fallon, Pusha performed “Dreamin Of The Past” – check it out above.