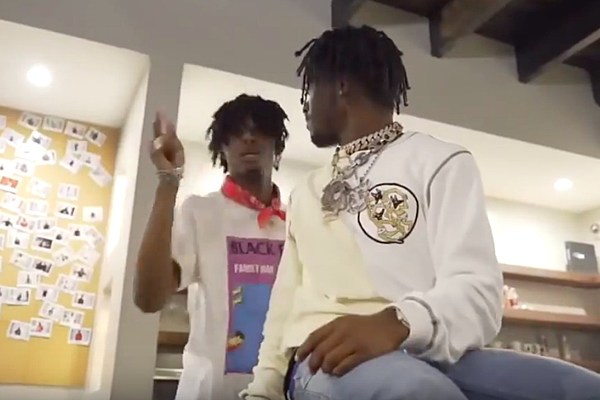 Playboi Carti and Lil Uzi Vert team up once again. This time, it's in Carti's video for "Lookin" a standout cut from his eponymous debut mixtape, which was just certified gold.

Directed by A$AP Rocky's AWGE creative agency, the new visual features deliberately blurry footage that looks like it came right f a VHS. In it, Carti hits the record store, the block and an alley as Milly Rocks everywhere in between. Uzi drops in to kick it with him throughout.

If you didn't know, Carti and Uzi have got quite the connection. For starters, Carti is a 2017 XXL Freshman, while Uzi belongs to XXL's Freshman class 2016. Uzi appeared on two tracks on Carti's debut project ("Lookin," "Woke Up Like This") and at one point, they were even supposed to go on tour together. The trek, which was to take place last fall, never happened, though, because Uzi said he needed to "focus."

While an Uzi and Carti tour never materialized, the two have been rumored to be working on a joint project. Hopefully that actually comes to fruition. After all, the two make a pretty solid team.

For now, enjoy the latest Carti x Uzi team up by peeping the video for "Lookin" below.