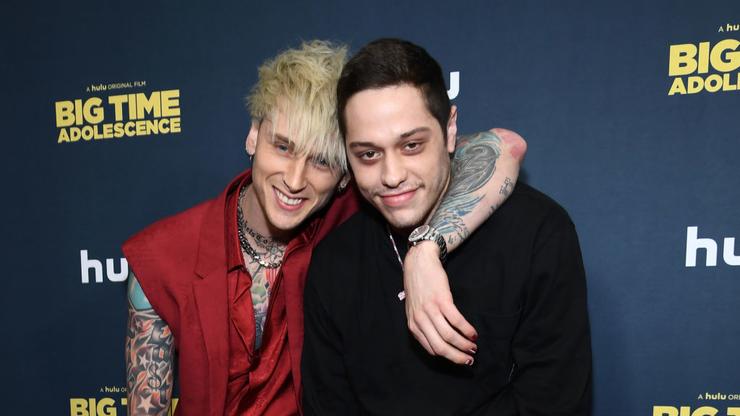 Pete Davidson and Machine Gun Kelly posed in their undies and talked about their manhood during a live stream on Calvin Klein’s Instagram.

It looks like Pete Davidson and Machine Gun Kelly will be the next celebrity endorsers of Calvin Klein Underwear. After Pete Davidson took over the brand’s Instagram presence on Monday night, going Live on the platform alongside his best friend MGK, the two stripped down to their underwear, much to the surprise of thousands of fans watching their stream.

During the live stream, Pete Davidson and Machine Gun Kelly joked as though they were taking sexy photos together for Calvin Klein’s campaign. The pair took turns posing on a white couch before taking off their pants and goofing around in their boxer briefs. The ridiculous stream included Kelly pouring popcorn into his comedian friend’s mouth, conversations about their genitalia, and a complete takeover from Pete on the Calvin Klein page. The star, who notably does not have IG, changed CK’s bio to “Pete here” and uploaded two photos of himself, including one with Kelly, on the brand’s feed.

“Are you gonna post us in our undies,” commented MGK on the first pic.

As they discussed their manhood, Pete complimented Kelly on his package, saying, “Nice stuff, by the way. I get it now. Good for you. Good for you, dog.”

“I would’ve put an extra two socks in there and blew the world’s mind,” replied the rocker, joking about a potential shoot with Calvin Klein.

What do you think of Pete Davidson and Machine Gun Kelly for Calvin Klein?