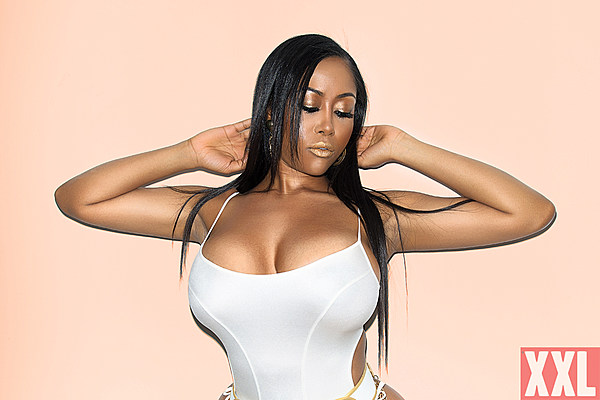 Look At Me Making her magazine debut, Moriah Mills shows why she breaks more necks than a pile driver from a wrestler with her out this world frame. We hope you have a chiropractor on speed dial. Words: Sean Malcolm Editor’s Note: This story originally appeared in the Summer 2017 issue XXL Magazine, on stands now.

“I’m just a normal girl,” Moriah Mills says, followed by a wink and a smile. “Yes, I portray a certain image on my IG but in real life, I’m pretty conservative.”

We’re not sure if the 25-year-old Queens native actually believes that or subscribes to fake news. Nevertheless, armed with a selfie stick and her astronomical 34DDD-25-43 body, @MoriahMillss has blessed her 1.4 million Instagram followers with an abundance pics and videos highlighting her Guyanese beauty. “You can’t have a hot video without confidence,” says the confident femme fatale, who hopes to parlay her social media popularity into acting and music. But, with a great number followers comes the hate—a fact not lost on Moriah, who quite frankly, does not care. “I get so many hateful comments and rumors started about me, it’s crazy,” Moriah confesses. “I handle it by not addressing it. I think people are not use to seeing a girl with a body type like mine too ten, so they’re quick to judge. I’m just living my life. I embrace my curves—either you like it or not. I’m still going to be Moriah, regardless.”

Live life to the limit and love it a lot.

XXL: You haven’t been in the social media game long, so are you surprised about the massive following you’ve gained?

Moriah: I didn’t expect things to take f as they did on my IG. I’m still shocked that it happened so fast. When I started my account in 2015, my videos brought a lot traffic. In one month, I gained 100,000 followers. I get over 500 DMs a day. But I guess that comes with the type things I post.

Exactly! If you had to describe your body in one word, what would it be?

I know this isn’t one word but “head-turner.” I say this because I cause a lot attention when I go out. Even when I try to tone down my sexiness, people still tend to stare. Good or bad, I embrace it all.

To say that you’re eye-catching when you walk the streets is a massive understatement.

I’ve always had a nice body. I always maintain my figure in the gym. I try to dress conservative. As you know, there’s a time and a place for everything but course, men will be men no matter how I dress. My curves are kinda hard to hide especially since I’m top heavy.

You have more than enough distractions when dudes are trying to work on their pecs so that isn’t surprising. Do you find it hard to date men who might be intimidated by your curves?

No, not really. But, when I do give a guy a chance to date me, they all seem pretty normal and comfortable around me. From most my experiences I’m usually the shy one.

Do you feel it’s a gift or a curse to have the body that you have?

I don’t mind it! Check out more from XXL’s Summer 2017 issue including the cover story with the 2017 XXL Freshman class, our interview with actor Demetrius Shipp Jr., Ski Mask The Slump God's grind for self-made success, Doin' Lines with Yo Gotti, $uicideboy$ and how they use hip-hop as therapy, Sonny Digital taking the helm the 2017 XXL Freshman Class cyphers and more.