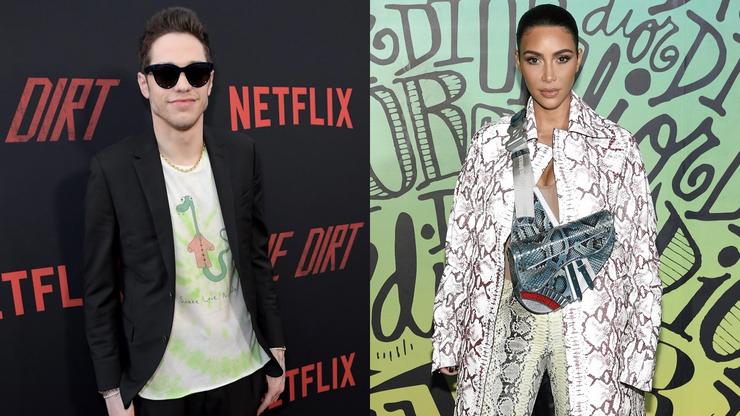 Fans aren’t sure how to feel about THOSE photos that surfaced over the weekend.

There’s no denying that world has seen some interesting celebrity couples have their 15 minutes of fame over the years. The most recent stars to do so are Kim Kardashian West and Pete Davidson, who were seen holding hands on a rollercoaster at Knott’s Scary Farm in California this past weekend.

Once the photos were leaked to the media, it didn’t take long for them to begin making rounds on social media, where fans were shocked (to say the least) to see KKW spending time with the comedian. The two starred opposite one another during a recent episode of Saturday Night Live, when Kim made her hosting debut, and even shared a kiss during a skit.

In the past, Davidson has been linked to hot, high-profile women like Ariana Grande, Kate Beckinsale, Kaia Gerber, and Margaret Qualley, so finding out that he and the mother of four are in the midst of a fling wouldn’t be entirely surprising, especially now that she and Ye have seemingly gone their separate ways.

Several Twitter users have shared their opinion on the matter, taking the time to crack jokes about the New Yorker making his rounds amongst Hollywood’s elite.

“Pete Davidson spotted holding hands with Kim Kardashian,” one person wrote above a clip of Snoop Dogg saying, “this motherf*cker don’t miss.” Someone else joked, “The possibility of Kim Kardashian and Pete Davidson being together…We’re really living in unprecedented times.”

Earlier this week, KKW arrived in New York, where Davidson spends most of his time, only further fuelling the rumour mill. The SKIMS founder was honoured at the Museum of Modern Art with WSJ Magazine’s Brand Innovator of the Year award, but it’s been said that’ll be in the city for at least a few more days, so who knows what else she’ll get up to.